Buzek, Ehler, Nica and other prominent legislators on the EU R&D programme secure their seats, but committee assignments are yet to be decided

The political pundits are calling the EU elections a vote for change generally – to left or right, depending on your viewpoint. But for Horizon Europe, the EU’s next big R&D programme, the vote resulted in most of the key legislators winning re-election and likely continuing their work on the programme.

Jerzy Buzek, a former Polish prime minister and current chair of the committee that handles Horizon Europe, was returned to the Parliament. So too were the two rapporteurs, or legislators in charge of the legal drafting: Germany’s Christian Ehler and Dan Nica of Romania. Though committee assignments are still weeks away, the three of them are expected to help steer the next research and innovation programme through the upcoming negotiations over the long-term budget of the European Union.

Buzek, a member of the Parliament’s centre-right European People’s Party, won his fourth mandate in Poland’s Silesia district. Ehler, another EPP delegate, also secured his seat despite his national party in Germany only winning 28 per cent of the votes, down seven points since 2014. Nica, a former deputy prime minister, came in fifth on the list of Romania’s Social Democratic party, which won 23 per cent of the vote in that country.

Several other members of the Committee on Industry, Research and Energy, were also returned to their seats. They include Romanian conservative Cristian Bușoi and Green MEP Reinhard Bütikofer of Germany. Vice-chair Patrizia Toia of Italy has also kept her seat.

There are also departures, of course. A vice-chair of ITRE and long-time critic of EU research programmes, Germany’s Hans-Olaf Henkel bowed out and decided not to run for another mandate. Lieve Wierinck of Belgium, Ashley Fox and Clare Moody of Britain, and Jakop Dalunde of Sweden, all lost their seats.

But several newly elected MEPs might be candidates for ITRE, given their backgrounds and expressed interests. French oceanographer Pierre Karleskind has won a seat in the Parliament and has previously told Science|Business that he wants to join ITRE to promote R&D into sustainable use of marine resources, as a driver for economic growth.

Portugal’s Maria Da Graça Carvalho, a former MEP and one of the lead drafters of the current R&D programme, Horizon 2020, also won a seat in the new Parliament. A former Portuguese science minister, Carvalho ended her first mandate in 2014 and she has since advised EU research commissioner Carlos Moedas and the Commission’s research department, but now is coming back to the Parliament on a promise to secure a bigger budget for Horizon Europe.

Also, in Hungary, Katalin Cseh and Anna Donáth secured seats on the list of opposition party Momentum, a new political movement advocating for EU expenditure on research and innovation to double and for the EU to create a mechanism that enforces commitments made by member states to raise their R&D expenditure to three per cent of GDP.

The ITRE committee scrutinises EU legislation relating to research or industry. In the past term, the committee met 78 times, passing judgement on 64 files.

Below a breakdown of re-elected ITRE members. 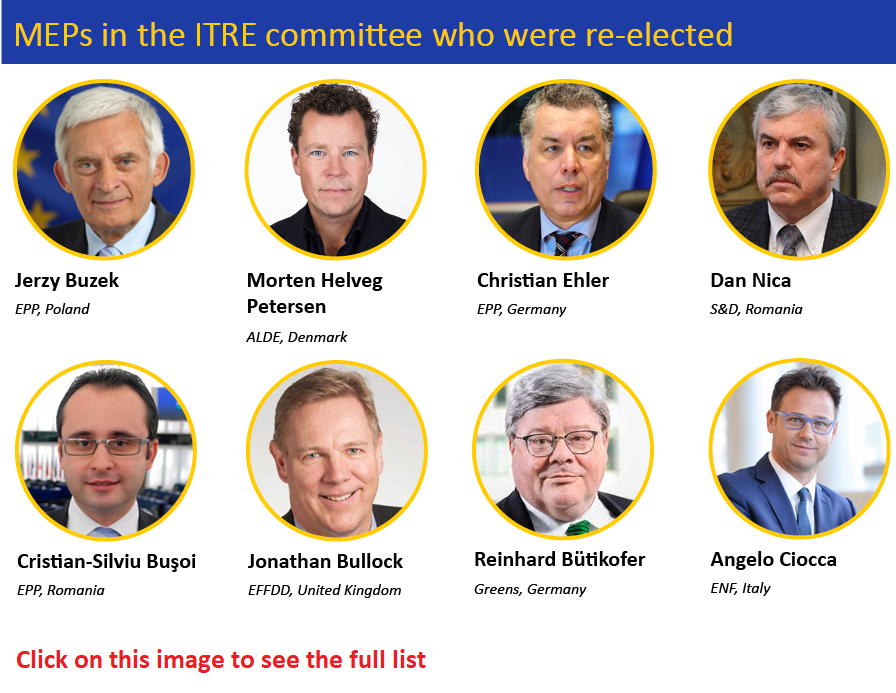 This article was updated on 28 May 2019 to correct an error: Jakop Dalunde was not re-elected.

This article was updated on 21 June 2019 to remove Angelika Mlinar from the list of re-elected MEPs. She was not re-elected.