CNRS: Speaking with a robot is not as pleasant as talking to a human

Researchers from the CNRS and Aix-Marseille University1 have used a novel approach to demonstrate that interactions with humans activate the brain’s social reward system more than discussions with robot interlocutors. The scientists employed functional magnetic resonance imaging (fMRI) to record the brain activity of participants speaking with another human or with a robot. Published in Philosophical Transactions of the Royal Society B (11 March 2019), their findings show that, when compared to a similar conversation with a robot, dialogue with a fellow human significantly increases activity in the amygdalae, basal ganglia, and hypothalamus. The first two of these brain structures are involved in cerebral reward circuits while the third synthesizes oxytocin, a neuropeptide that specifically promotes the formation of social bonds. The researchers have made their data available to the scientific community for studying the cerebral mechanics that underlie the social behaviour of conversation. 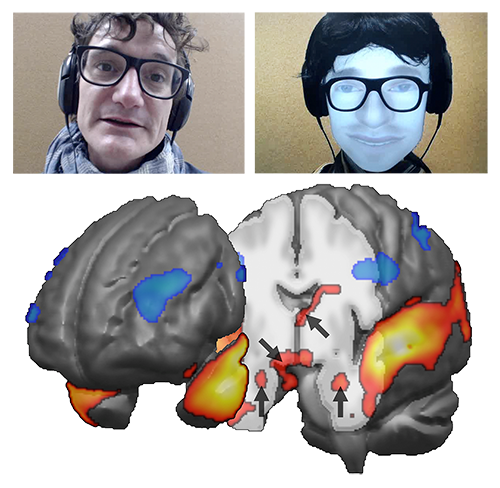 The participants saw, heard, and spoke with either a human (top left) or a conversational robot (top right), in real time. The brain image below the photos reveals the distinct regions activated during discussion with a human (areas in warmer colours) or a robot (cooler colours). The arrows on the cross section indicate activity in the basal ganglia (top), the two amygdalae (bottom), and the hypothalamus (middle). © Thierry Chaminade, Institut de Neurosciences de la Timone (CNRS / AMU)

This release was first published 12 March 2019 by CNRS.