EU still behind on AI, but not as much as feared

New advisory report pushes back on claims China is set to achieve dominance in the technology, and shows just how much of a loss the UK is to the EU’s AI ecosystem.

The EU continues to lag behind the US and China when it comes to artificial intelligence, according to one of its advisory bodies, but the bloc is not as far behind as is often assumed.

In a new report, the Joint Research Centre also casts some doubt on China’s prowess as an AI power, and concludes that Brexit has led to a “considerable downsizing” of the EU’s AI strength, given how strong the UK sector is.

“The US is in a leading position,” according to the JRC’s AI Watch Index 2021.“The EU is third [after China], but several elements support the thesis that the distance with the two leading countries is less than often suggested.”

Brussels is seeking both to boost the EU’s AI research and innovation and curb its potential for social harm. Its proposed AI Act would largely prohibit practices like social scoring, or real-time public facial recognition.

At the same time, the Commission plans to invest €1 billion a year in AI and bring overall EU spending up to €20 billion annually – a target this latest report expects the bloc to hit this decade if big budget increases continue.

Measuring the relative strength of different countries in AI is inevitably tricky. But the report breaks it down into several metrics, ranging from the number of organisations involved in AI research and innovation to the number of students studying the field.

When it comes to organisations active in AI– which are mostly companies, but also include universities and other research institutes – the US has close to 14,000, China over 11,000, and the EU just shy of 6,000. On this measure, then, the EU lags far behind its rivals, particularly when adjusted for the overall size of its economy.

By contrast, the US, even when its economic size is taken into account, has a particularly high number of AI players. 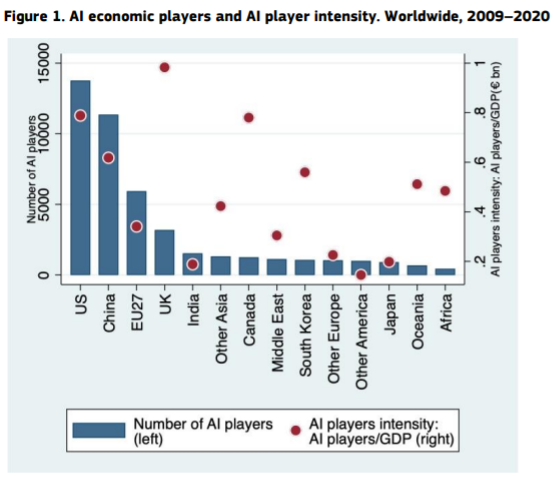 The report laments what a blow Brexit is to EU’s AI scene, although the UK’s exit certainly hasn’t brought cooperation to a stop, even as London wants to go its own way on regulation. “The UK holds simultaneously a remarkable number of AI players and the highest ratio of players to GDP of all geographic areas considered,” it says.

“This highlights the consequent loss of strength of the EU AI landscape in the global perspective after the Brexit.” Prior to its departure, the UK accounted for more than half of the EU’s AI players, it says.

The report also used another basket of metrics, including how many articles countries published at top AI and robotics conferences, to drill down into national specialisms.

It finds that the EU is particularly strong in what it calls AI service activities – which include digital infrastructure, software and platforms – and autonomous robots which can interact with humans and other machines in complex environments. In 2016-2019 (the last year for which data is available) there were around 300 or more robotics start-ups founded in the EU annually.

But the US is also comparatively strong in these areas, as well as several more, like natural language processing and autonomous vehicles. “Therefore the leading position of the US appears solid and without specific weaknesses,” it finds.

In terms of training future AI experts, Germany leads EU efforts with nearly 180,000 places for bachelor’s students in programmes with at least some AI content.

The report pours some cold water over claims that China is emerging as a world leader in AI. “In recent years, China has experienced an explosion in the filing of patents (included those related to AI), yet the same is not reflected in other indicators (such as frontier research activity), indicating that its AI ecosystem may be less dense than it appears based on patenting activity alone,” it concludes.

Most Chinese AI firms are involved in patenting, but this flurry of patenting “reveals the modest innovative potential of these patents.” This could also be driven by recent government subsidies for patents, rather than “true innovative capacity.”

Still, other reports have shown China’s dramatic rise as an AI research power. In 2019 it accounted for 22.4% of the world’s peer-reviewed AI publications, more than the EU (16.4%) and the US (14.6%), according to the Artificial Intelligence Index Report 2021, produced by Stanford University.

In the same year, China overtook the US for the first time in AI journal citations. But the US continues to lead when it comes to the share of AI conference publications.

Another unusually candid report into Chinese technological strengths and weaknesses by the Peking University Institute of International and Strategic Studies – posted online earlier this year but then quickly taken down – concluded that the US and China were far ahead of any rivals on AI.

“The US has the advantage of computing power and algorithms, and China benefits from huge and diverse domestic big data,” it found.

But the US was still winning the competition for top talent, it found. “Among China's top AI talents, 34% are employed domestically, and about 56% are employed in the United States,” it warns. Nine in ten Chinese students who studied the field in the US stayed their after graduation, and just 10% returned to China.