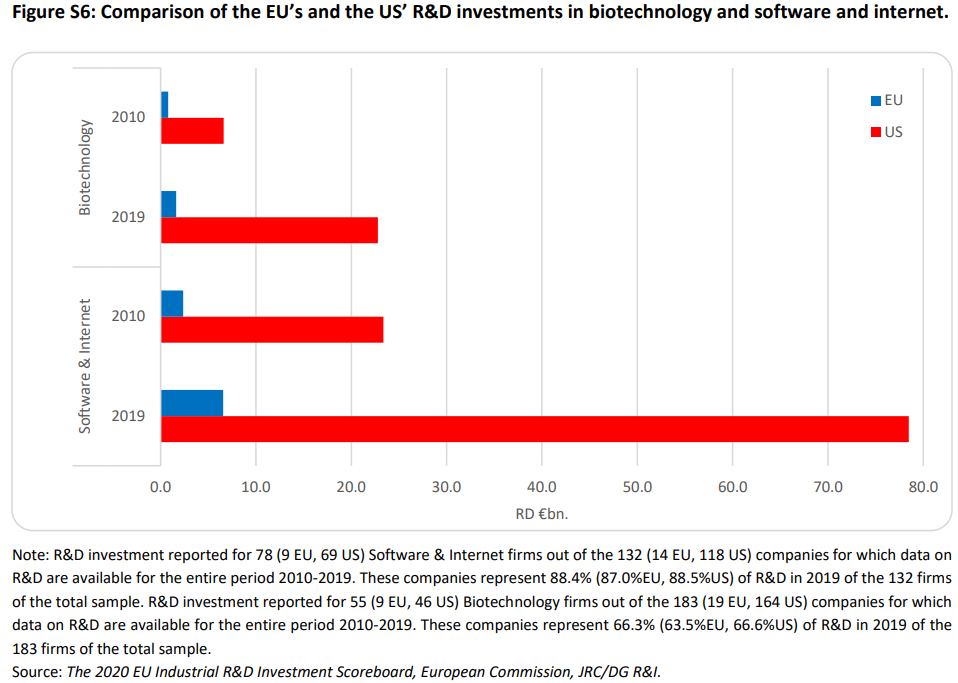 Despite the success this year of a few European biotech companies in the COVID-19 disaster, overall EU corporate investment in a biotech and key computing technologies lags far behind that of their US competitors, according to a new report by the European Commission’s Joint Research Centre.

EU-based biotech companies in 2019 spent €2.6 billion on R&D – a fraction of the €34.3 billion spent by US-based companies. In software and internet services, EU companies spent €7.5 billion on R&D compared to €92.7 billion by US companies. The numbers partly reflect that the EU has fewer such companies than the US, but even after that is taken into account the gap remains. At the same time, Chinese companies now track second in the world in investment in these sectors after the US.

Of course, given that R&D is unpredictable, this doesn’t mean the EU has no success in the field. The most famous example of an EU biotech hit in 2020 was Germany’s BioNTech, whose research spearheaded the development of the newly released Pfizer-BioNTech COVID-19 vaccine.

But, the JRC report says, the general situation “is a major challenge for the EU since these are the key sectors required to support the industrial transition strategy. Indeed, the ICT industry is taking a larger share of the value added in sectors where the development of green technology is required to replace fossil fuels, e.g., in the transition to electric mobility. On the other hand, biotechnology is increasingly the basis for the development of new drugs, e.g., genetic engineering applied for developing a large range of drugs including vaccines.”