New Chair and members announced for GÉANT Board of Directors

At this week’s virtual GÉANT General Assembly (GA) meeting our members voted for four open GÉANT Board positions and for the position of Chair of the Board.

Christian Grimm of DFN stands down after the maximum term of six years, the last five of which were as Chair of the Board and mark a highly successful and collaborative period for the GÉANT community. On behalf of the Board and the wider community GÉANT thanks Christian for his excellent service.

Replacing Christian as Chair of the Board is Andreas Dudler of SWITCH, who has served on the Board for the past four years. 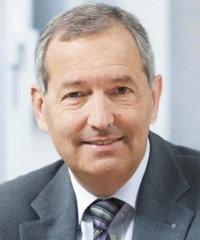 Andreas Dudler – SWITCH (elected Chair of the Board, one-year term)

Andreas has been Managing Director of SWITCH since May 2012. He is responsible for the deployment of technology and the operation of all SWITCH services. Even before being appointed Managing Director, Andreas Dudler has given SWITCH and the Swiss academic community many years of commitment alongside his main job. As Chairman of the Foundation Council from 1999 to 2011, he was instrumental in establishing and expanding the foundation and its Education and Research Network.

In addition to his work with SWITCH and GÉANT, Andreas also works with ROKJ – a private Swiss social programme helping children suffering from poverty and social exclusion develop to their full potential.

Commenting on today’s appointments, Andreas said, “GÉANT has a great history of collaboration in Europe, together defining and achieving common goals. Our collective strength ensures education and research continue to move rapidly forward, and society benefits from all our work. I am extremely proud to be elected as Chair of the Board and look forward to working with GÉANT Board members and the whole community to build on this great history.”

New and Re-Elected Board Members

Four new Board Member positions arose as a result of Andreas vacating his seat to take on the role of Chair, as well as terms of office due to expire at the end of 2020 for Marko Bonač (ARNES) who has served the maximum six years and steps down, Raimundas Tuminauskas (PSNC) who has served for five years, and Federico Ruggieri (GARR) who has served three years.

We are pleased to now announce the following Members have been elected to the GÉANT Board of Directors​ following the voting process: