The PARSIFAL Project ("Prandtlplane ARchitecture for the Sustainable Improvement of Future Airplanes”), recently concluded, has achieved all the expected objectives, providing all answers concerning the technical feasibility of the PrandtlPlane adoption as well as the environmental, economic and logistic impacts of its introduction into the air civil transport of the future, worldwide. 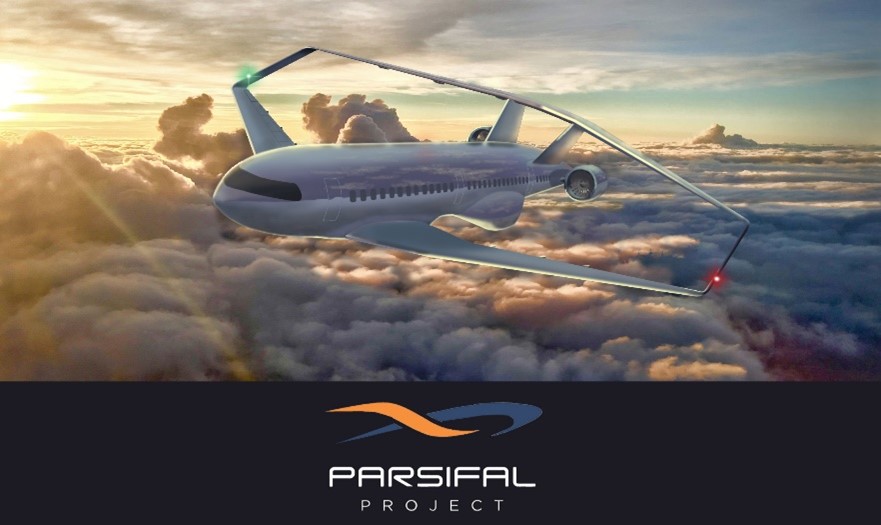 The PARSIFAL project has been funded by the European Union under the Horizon 2020 Program.

The project, started in May 2017 and concluded in July 2020, has been coordinated by the University of Pisa (Italy), with partners ONERA (France), TUD (Netherlands), ENSAM (France), DLR (Germany) and SkyBox Engineering (Italy). The consortium has been supported by an external Advisory Board made up of experts from the aircraft manufacturers (Leonardo, Airbus), airport management companies (Milan and Tuscany airports), airlines (KLM), and aeronautics professionals, who have contributed to steer the research towards concrete objectives with attention to market interests.

Aiming to demonstrate the technical, environmental and economic feasibility of a box-wing configuration, the project has been focused on the needs of short-to-medium routes air traffic (<4000 km), for which most of the aircraft in service today belongs to category "C" of the ICAO reference code of airports (wingspan within 36 meters).

Since this category of aircraft is expected to play the main role in the future increase in air traffic, with expected growth factors up to 2x in the next 20 years, PARSIFAL has faced the challenge of designing an aircraft of the same category "C" and, hence, compatible with current airports and with most of their infrastructures, but with higher mission performance.

The plane has a "box-wing" architecture deriving from Ludwig Prandtl’s studies of early 1920s. The application of the Prandtl’s “best wing system” concept to aircraft design is the starting point of PARSIFAL project. Therefore, in honour of Prandtl, the resulting aircraft configuration has been called "PrandtlPlane".

Taking advantage of the aerodynamic and structural advantages offered by the box-wing configuration, the aircraft studied in PARSIFAL is capable to reduce the fuel consumption per passenger up to 20%, with a significant impact on environment and market opportunities. This performance improvement is made possible thanks to the improvement of the payload capability (up to 308 passengers vs. 186 of competitor aircraft from A320 and B737 families), without increasing the overall dimensions of the aircraft (wingspan within 36 meters).

At the end of the three years of research, the results achieved allow to affirm that the PrandtlPlane constitutes a valid response to future air traffic needs, being able to cope with the increasing demand of available seats without thereby aggravating the saturation level of many airports that today appear increasingly congested.

To have an overlook on the main results achieved within the project, the 3rd and final Project Newsletter can be downloaded here.

The project activities have gone beyond the initial plan: in the final phase of the project, a scaled flying demonstrator has been built, in order to validate the results coming from simulations and analyses.

The demonstrator is a 1:18 scaled model, 2.5 meters long, with a wingspan of 2 meters and a maximum weight of 22.5 kg. It is equipped with a full set of control surfaces (elevators, ailerons, flaps, rudders), a retractable landing gear and is equipped with sensors for measuring height, speed and position (GPS).

The model is powered by 2 electric fans capable of providing up to 8.8 kg of thrust each, and is controlled through a ground station which allows complete data recording, command law editing and channel mixing.

The model is manufactured with assembled parts, modelled with foam covered by an epoxy resin layer reinforced with fiberglass fabric.

The first tests carried out confirmed the expected stability of the aircraft and its versatility during take-off and manoeuvring, thanks to the movable surfaces installed on both front and rear wings.

The model has been tested at an average height of 70 meters and a maximum speed of approximately 180 km / hour.

The video of the flight test is available here.

Due to the limitations imposed by the current COVID-19 sanitary situation, the previously planned “International Workshop” - which should have been held in Pisa at the end of the project - has been replaced with a "Virtual Final Event" set-up by means of two main dissemination events:

- a Live Webinar, held on July 23rd 2020, in which PARSIFAL partners and external advisors from Leonardo, Airbus, KLM and Toscana Aeroporti SpA have shared the project outcomes and their view on the future of the research on the PrandtlPlane;

This article was first published by University of Pisa.