CERN to optimise its energy consumption

In periods of operation, CERN’s accelerators, detectors and test facilities account for more than 90% of the Laboratory’s yearly average electricity consumption of 1.2 TWh. These powerful research instruments are what makes CERN’s unique scientific programme possible, supporting a global community of scientists in their fundamental physics research. Every effort is made to run them in the most energy-efficient way possible.

CERN is committed to limiting its increase in electricity consumption to 5% up to the end of Run 3 (baseline year: 2018*). To do so, CERN takes a comprehensive approach, carefully considering and evaluating every possible energy-saving activity to ensure complementary and maximum impact. Efforts to improve energy efficiency are guided by the Energy Management Panel (EMP), set up in 2015 to support the recent market-based electricity contract as well as to raise awareness of the need for energy efficiency at CERN. The panel brings together representatives of CERN's most energy-intensive activities.

The Organization’s electricity distribution is monitored via an integrated WebEnergy tool developed by the EN department with guidance from the EMP. WebEnergy measurements rely on monitoring tools with an accuracy better than 1%. This precise monitoring helps increase awareness among energy-intensive departments and services. The tool also makes it possible to conduct forecasting for optimisation: CERN sends the result of the forecast modelling, which is based on CERN’s accelerator schedule, to the energy contractor and regularly receives a bonus for the precision of this forecast, i.e. +/- 15% for at least 10 months per year.

When in operation, the LHC is responsible for some 55% of CERN’s energy consumption. In the coming years, the luminosity (the number of collisions produced by the LHC) will increase substantially. Higher luminosity equates to more data for the experiments, giving them greater precision and more potential for new discoveries, but it also comes at the cost of greater energy consumption. CERN has developed a specific metric to illustrate the quantity of electricity used per unit of luminosity delivered, expressed as gigawatt hours per inverse femtobarn (GWh/fb-1). With respect to Run 1, the HL-LHC will increase the energy efficiency of CERN’s flagship facility by a factor of ten over 20 years. 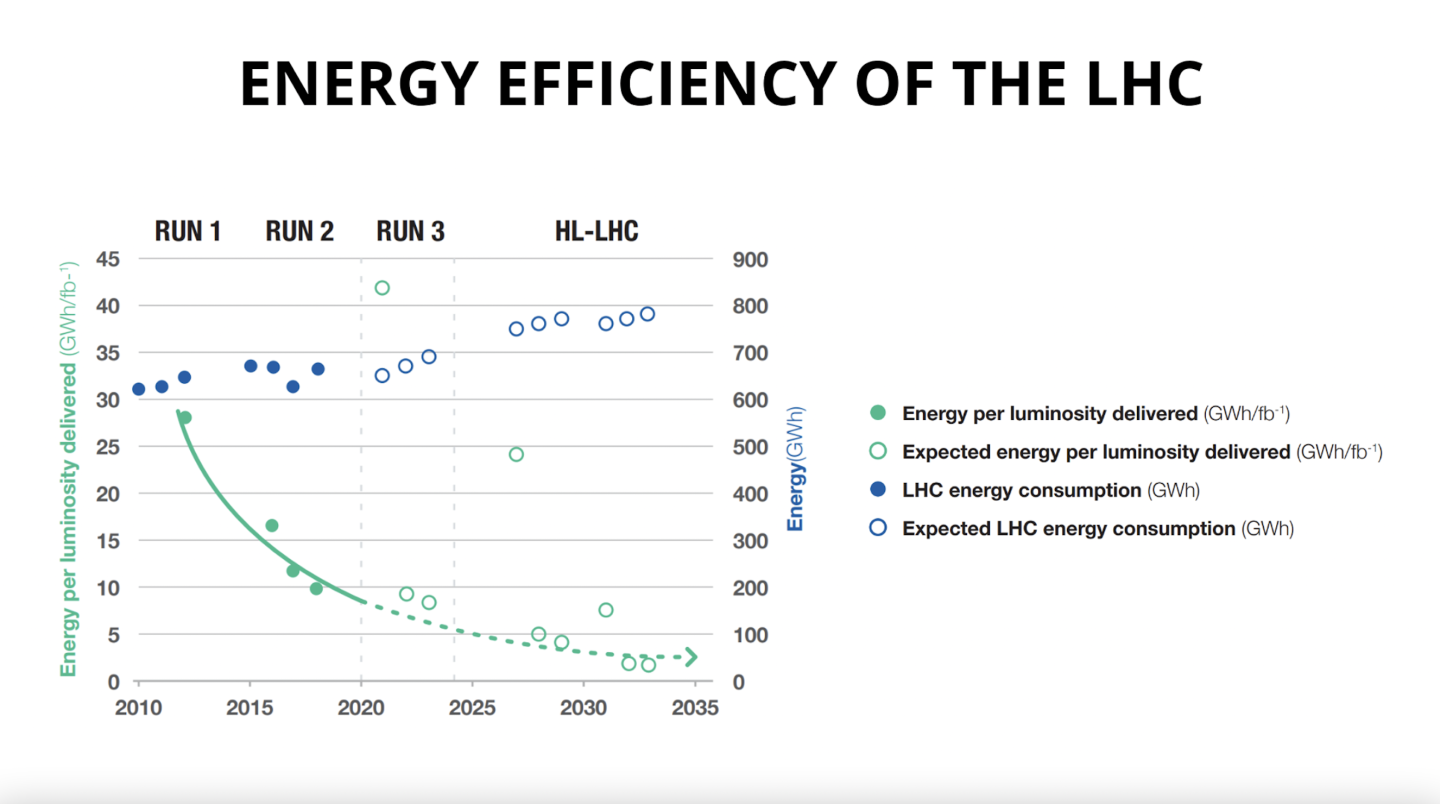 With the growing environmental awareness of the recent decades, CERN strives to be an example for environmentally-friendly research. Energy is one of the factors in reducing the Organization's ecological footprint. With energy prices set to increase significantly in coming years, which will have a concomitant impact on CERN’s budget, and following an internal audit carried out in 2021, the Organization has initiated the process of obtaining the ISO 50 001 certification for energy management. A critical step in this process is to document the Laboratory’s energy baseline and define complementary energy performance indicators covering the Organization’s main energy uses in addition to the aforementioned metric for the LHC. It also requires objectives and energy targets to be specified and a plan drawn up to achieve them. The aim is to issue an energy performance plan covering these items to the French authorities by mid-2022. The process will entail reviewing and completing CERN’s energy policy, designing new tools to measure performance, and organising formal audits carried out by an accredited certification body (planned for the end of the year). In this context, all future initiatives aimed at improving energy performance will be assessed according to the requirements of the ISO 50 001 standard. Obtaining the certification will allow CERN to receive a significant rebate on its electricity transmission costs for the coming years.

Although energy consumption from the tertiary sector, such as buildings, the data centre and conventional facilities, only represents up to 10% of CERN’s total electricity consumption during LHC operation periods, meaningful improvements can also be achieved there. In this vein, the SCE department carries out two building renovations per year with a view to improving energy performance, comfort level and safety conformity. CERN’s public and indoor lighting is gradually being replaced. Studies are ongoing into recovering waste heat from the new CERN Data Centre in Prévessin to heat surrounding buildings, thus reducing emissions from the gas heating plant. Furthermore, plans are under way to use heat recovered from CERN’s cooling tower units at LHC Point 1 to heat buildings on the Meyrin site.

Use less, increase efficiency, recover more: these three principles underpin CERN’s strategy for energy management. And we all have a role to play, to ensure that each megawatt hour used brings added value to CERN’s performance and mission.