After three years of research, the BSC coordinated project LEGaTO concludes with major contributions to the main goal of energy efficiency in future HPC systems. The technologies developed in the project targeted one order of magnitude energy savings for five widely applicable use cases. In addition, six BSC European-funded projects will build on the outcomes of LEGaTO.

The project has attained the following results in the five use cases of healthcare, smart home, smart city, machine learning and secure IoT gateway:

“Besides technical and management leadership of the project, the BSC LEGaTO team has substantially contributed towards the LEGaTO goal of an order of magnitude energy-savings on heterogeneous compute devices leveraging the OmpSs write-once deploy-everywhere task based programming model and associated dataflow runtime” said Osman Unsal, Group Manager for the Department of Computer Architecture for Parallel Paradigms at the BSC and coordinator of LEGaTO.

LEGaTO has provided excellent outcomes from the OmpSs perspective, including the support for CUDA and OpenCL devices when they are available in the same machine. This effort includes combinations like Intel FPGAs and Nvidia CUDA GPUs. Large improvements have also been achieved on the support that OmpSs now has for Xilinx FPGAs (aka [email protected]), and the implementation of the directory cache for GPUs and FPGAs within OmpSs-2.

Additionally, the experience with LEGaTO’s partners Technion and Maxeler has been successful in achieving the integration of the DFiant DSL kernels, and the support for Maxeler kernels at the runtime level. In collaboration with Maxeler, the development of the task graph analysis tool is very important for future application developments on FPGAs, to know specifically which parts of the application and with what shape can be better exploited on the FPGA. Last but not least important, it has been very useful to investigate the use of SGX for secure tasking, showing that OmpSs tasks can be executed securely in SGX Enclaves. 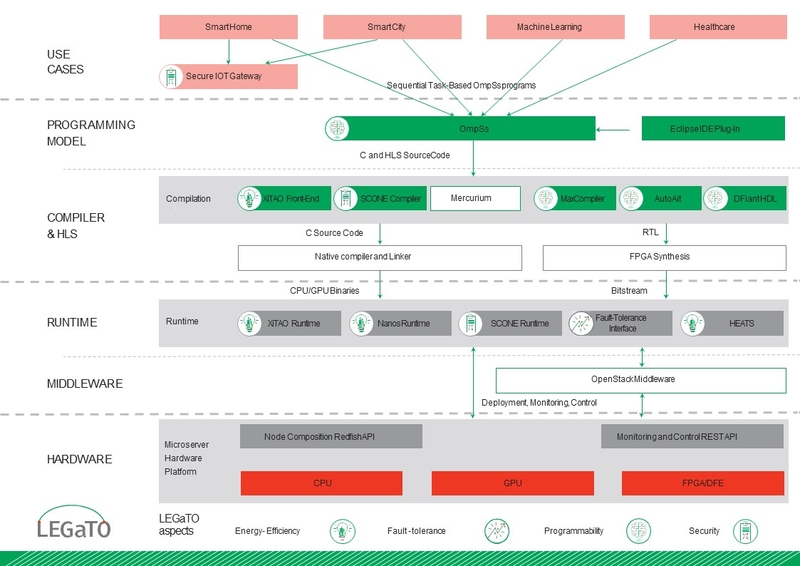 In addition to other initiatives already using LEGaTO-developed technologies, six European BSC projects will continue the development of the results achieved in LEGaTO:

Lastly, LEGaTO also contributed to the report “Towards Resilient EU HPC Systems: A Blueprint”, which aims to spearhead a Europe-wide discussion on HPC system resilience and to help the European HPC community define best practices for resilience.

This article was first published on 18 January by BSC.