Climate change is bringing with it not only drier summers, but warmer springs too. This causes trees and shrubs to bud earlier, making them vulnerable to late frost, as ETH forest scientists have now proven.

Frost damage to young beech leaves on the Zugerberg, taken on 24 April 2017 only a few days after a heavy frost. (Image: Christof Bigler/ETH Zurich)

During the hot summer months, humans and animals alike enjoy the shade offered by the leafy canopy of trees and shrubs. In order for deciduous woods to make maximum use of the growing season, when growth and reproduction are possible, they must bud early in the springtime. Climate change favours this: with rising temperatures, the growing season in Switzerland has generally shifted forward.

Yet this presents plants with a dilemma: while early leaf unfolding extends the period in which plants can grow, early budding also increases the risk of frost damage to leaves and blossoms. The heavy late frost around 20 April 2017 provides a striking example of this: after an extremely warm March and April, temperatures in the lowlands dropped well below zero degrees Celsius for several days – with dramatic consequences for vegetation, not least for Swiss fruit and vines.

Senior Scientist Christof Bigler and Harald Bugmann, ETH Professor of Forest Ecology, have now examined in more detail whether and how the frost risk has changed for the leaf unfolding of 13 European tree and shrub species in Switzerland over a period of 60 years. To this end, they analysed temperature measurements and 48,000 observations of leaf unfolding carried out by MeteoSwiss at 264 stations since 1951. The researchers reported on their results in Scientific Reports.

Since around 1980, the time of leaf unfolding has shifted forward as a result of global warming, and the leaves and needles of some species are budding earlier, particularly at higher elevations. This means that the time between the last late frosts and leaf unfolding has shortened. “The risk of frost damage has therefore tended to increase,” says Bigler.

Nevertheless, in most of the years studied, the last intense late frosts have occurred before the leaves have unfolded, leading Bigler and Bugmann to conclude that many European tree and shrub species have relatively large safety margins with regard to frost risk. Yet the safety margins are distributed unevenly, as Bigler explains: “Species that bud early at an elevation above 1,100 metres, such as larch, have the lowest safety margins.” 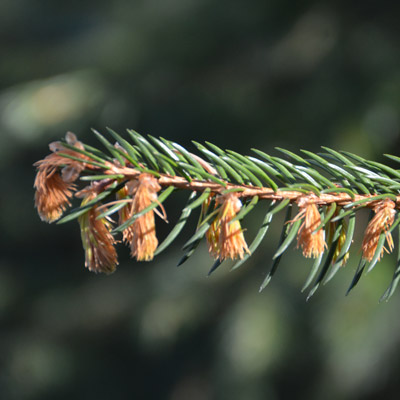 Even if springtime frost after leaf unfolding is relatively rare, every now and then above-average spring temperatures followed by intense cold results in frost damage to leaves and needles, as in April 2017, when Bigler observed that some affected spruces could no longer bud after the cold snap. “Since spruces have perennial needles, they can handle this – in contrast to deciduous trees, which often bud again.” And yet some seedlings and saplings would have barely survived last year's frost.

Frost damage weakens trees. If the leaves bud again, they lack the required resources to grow taller and thicker and to form roots. This makes them less competitive, as can be seen in tree rings, which are narrower after such frost events.

For plants, the time of leaf unfolding is a compromise between minimum frost risk and maximum vegetation period, and they adapt continuously. “The time of leaf unfolding has been fine-tuned over a very long evolutionary period,” says Bigler. In spring, however, trees also react to the rising temperatures: when it becomes warm, frost is less likely.

Bigler and Bugmann assume that extreme late frosts will continue to occur in a warming climate, but the trend towards earlier leaf unfolding will continue for some time. A better understanding of how local trees and shrubs react to changing conditions will allow forest ecologists to estimate more precisely how quickly our forests will grow in the future and how species composition will develop.