The coronavirus pandemic is disrupting universities and research institutes across the world. But the same institutions are also working very hard to find out how the disease can be stopped and its effects mitigated.

Follow this live blog for the latest updates on how the crisis is impacting research and innovation, and what governments, funders, companies, universities, associations and scientists are doing to stop or cope with the pandemic.

US to join in global fight against COVID-19

As the US re-engages with the World Health Organisation (WHO), it will also be joining WHO’s COVAX and ACT-Accelerator initiatives, set up to spur the development of vaccines and therapies, and to ensure their distribution in poorer countries.

“I am pleased to announce today that the US plans to work multilaterally to respond to and recover from the COVID-19 pandemic,” Anthony Fauci, the new US chief medical officer told a meeting of executive board of WHO this morning.

“President Biden will issue a directive later today which will include the intent of the US to join COVAX and support the ACT-Accelerator to advance multilateral efforts for COVID-19 vaccine, therapeutic, and diagnostic distribution, equitable access, and research and development,” Fauci said.

Fauci also thanked WHO for the way it has responded to the pandemic. “Under trying circumstances, this organisation has rallied the scientific and research and development community to accelerate vaccines, therapies and diagnostics; conducted regular, streamed press briefings that authoritatively track global developments; provided millions of vital supplies from lab reagents to protective gear to health care workers in dozens of countries; and relentlessly worked with nations in their fight against COVID-19,” he said.

These were spread across many disciplines including biomedicine, built environment and design, and economics.

Virus transmission and face mask protection were among the most heavily discussed topics in the analysis of 87.7 million mentions of 3.4 million papers.

The top articles on Covid-19 include:

A laboratory study to test if the Pfizer/BioNTech COVID-19 vaccine is capable of protecting against a variant of SARS-CoV-2 first detected in the UK, has found that blood samples from vaccinated people neutralise the virus.

The variant, called B.1.1.7, has ten mutations located in the spike protein against which most COVID-19 vaccines are designed. To test the impact on the effectiveness of their vaccine, researchers at Pfizer/BioNTech genetically engineered a replication-deficient virus with the full set of spike mutations. Sera from blood samples of 16 people who took part in a clinical trial of the vaccine inhibited this pseudovirus in a range said to be biologically equivalent to the effect on the original virus that emerged in Wuhan, China.

BioNTech and Pfizer previously published data from a study that evaluated N501Y, one of the key mutations in the B.1.1.7 variant, which is shared by the South African variant that is also causing concern. That study showed efficient neutralisation of the N501Y mutated virus by sera of individuals who had received the Pfizer/BioNTech COVID-19 vaccine.

The two companies said further studies are needed to monitor their vaccine’s effectiveness in preventing COVID-19 caused by new virus variants. It has not been established what reduction in neutralisation might indicate the need to modify a vaccine, but the underlying technology would enable such adjustment.

Health may be a member state competence and an area where the European Commission has very limited powers and influence, but a review of the EU’s initial contribution to the public health response by the European Court of Auditors shows it diverted €547 million to research on COVID-19 between January and June 2020.

The Commission first committed €10 million Horizon 2020 funding for research on COVID-19 on 31 January 2020, using the provision in its work programme that had already committed this amount in case of a public health emergency.

This funding was increased to €48 million by the end of March to support 18 projects (out of 89 eligible applications) developing vaccines, diagnostics, new treatments and monitoring systems.

The Commission then launched a further call for funding applications in May 2020, with a total budget of €130 million, to support 23 projects.

The Innovative Medicines Initiative, the public private partnership between the Commission and the pharmaceutical industry, also launched a call for funding applications in March. It selected eight projects focusing on diagnostics and treatment development, which will receive in total €117 million, €72 million of which is in grants from the European budget.

Then, in April, the Commission committed another €166 million of funding in April 2020 via the EU business accelerator programme, the European Innovation Council, to 72 companies working on innovative projects related to COVID-19. 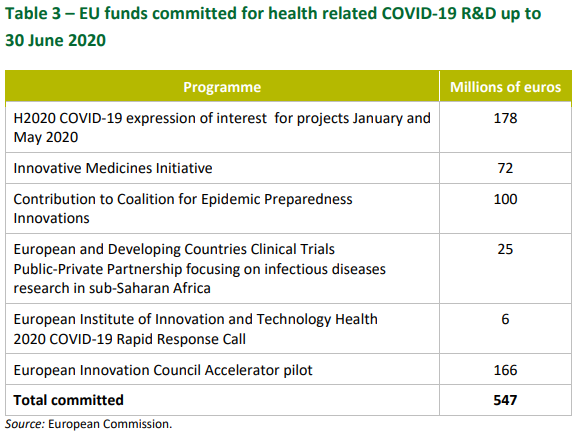 The head of the World Health Organisation Tedros Adhanom Ghebreyesus, has hit out at the disparity in access to COVID-19 vaccines, saying, “It’s right that all governments want to prioritise vaccinating their own health workers and older people first. But it’s not right that younger, healthier adults in rich countries are vaccinated before health workers and older people in poorer countries.”

There will be enough vaccine for everyone, Ghebreyesus said. “But right now, we must work together as one global family to prioritise those most at risk of severe disease and death, in all countries.”

Over the past nine months, WHO has been working through the ACT Accelerator and the COVAX vaccines programme to lay the ground for the equitable distribution and deployment of vaccines. It has secured two billion doses of vaccines from five producers, with options on more than one billion more doses. The aim is to start deliveries in February.

But several WHO member states have questioned whether COVAX will get the vaccines it needs, and whether high income countries will keep the promises they have made to donate vaccines.

“The promise of equitable access is at serious risk,” Ghebreyesus said. More than 39 million doses of vaccine have now been administered in at least 49 higher income countries. Just 25 doses have been given in one lowest income country.

“I need to be blunt: the world is on the brink of a catastrophic moral failure,” said Ghebreyesus. “Even as they speak the language of equitable access, some countries and companies continue to prioritise bilateral deals, going around COVAX, driving up prices and attempting to jump to the front of the queue.”

The situation is compounded by the fact that most manufacturers have prioritised getting regulatory approval in rich countries where the profits are highest, rather than submitting full dossiers to WHO, according to Ghebreyesus. “It’s not too late. I call on all countries to work together in solidarity to ensure that within the first 100 days of this year, vaccination of health workers and older people is underway in all countries,” he said.

The European Medicines Agency said it has begun the rolling review of Johnson & Johnson’s single dose COVID-19 vaccine, weighing up the evidence that is available currently, in advance of a formal application for marketing approval from the company.

The European Commission has agreed to buy 200 million doses, with the option to secure up to 200 million additional doses.

Johnson & Johnson announced last month that it has completed recruitment to the phase III trial of the vaccine, enrolling approximately 45,000 participants. There is a high level of COVID-19 infection in the countries where the trial is being conducted and the company expects there will be enough cases to show if the vaccine is effective by the end of January.

If so, Johnson & Johnson said it expects to apply for emergency use approval from the US FDA in February, with applications to other regulators made in parallel.

Data on durability of immune responses in trial participants aged over 65 years will be available in late January and longer-term follow-up to one year is planned.

The Swiss federal government has secured 7.5 million doses of Moderna’s COVID-19 vaccine following approval by the regulator Swissmedic, with first deliveries to the country expected to begin next week.

The authorisation is based on a rolling submission of data, including an analysis from the phase III clinical study published on 30 November.

The Moderna vaccine is also approved in the US, EU, Canada, Israel and the UK and is under review in other countries and by the World Health Organisation.

Commission on verge of signing contract for 7th COVID-19 vaccine

As it defends itself against criticisms of the slowness of the centralised procurement of COVID-19 vaccines, the European Commission said it concluded exploratory talks with French biotech Valneva to buy its potential vaccine. The contract involves an initial 30 million doses with an option for up to 30 million more.

This is in addition to contracts already signed with AstraZeneca, Sanofi/GlaxoSmithKline, Janssen, Pfizer/BioNtech, CureVac, and Moderna. The Commission has also had talks with US biotech Novavax.

The agreement with Valneva further complements the EU vaccines portfolio, said Commission president, Ursula von der Leyen. “The continuing COVID-19 pandemic in Europe and around the globe makes it more important than ever that all member states have access to the broadest possible portfolio of vaccines,” she said.

The European Medicines Agency said it has received an application for approval of the COVID-19 vaccine developed by AstraZeneca and Oxford University and will decide on the application on 29 January, during the monthly meeting of its scientific committee for human medicines (CHMP).

The agency said such a short timeframe for evaluation is only possible because it has already reviewed some data on the vaccine during a rolling review. During this phase, EMA assessed preclinical data, data on quality its ingredients and the way it is manufactured and also considered some evidence on safety and efficacy from a pooled analysis of interim clinical data from four ongoing clinical trials in the UK, Brazil and South Africa.

US biotech Moderna said EU deliveries of its COVID-19 vaccine will begin on Monday, 11 January from its central hub in Europe, after the European Commission granted a conditional marketing authorisation for the product on 6 January. Vaccine shipments will be delivered to one pre-agreed central location within each member state, from where each country will coordinate national distribution.

Manufacturing of the vaccine drug substance is carried out by bioprocess specialist Lonza at its site in Switzerland, with filling of vials and packaging done by ROVI in Spain. Further fill and finish capacity will be provided by Recipharm in France in the first half of 2021.

On 18 December last year the Commission exercised an option to order an additional 80 million doses of Moderna’s vaccine against COVID-19, bringing order commitment for 2021 to 160 million doses.

The product has also been authorised for use in the US, Canada, Israel and the UK.

The Coronavirus R&D Gateway is a resource for researchers, companies, policymakers and the interested public at large. The R&D Gateway has been created in cooperation with several partner organisations. It constitutes a one-stop-shop for a number of tools and information sources supporting the ongoing efforts to defeat the COVID-19 pandemic.