Universities in central and eastern Europe are optimistic about competing with their counterparts in the west for Horizon 2020 funding, but say catching up is a long-term process. Grants help, but capital investment in new research infrastructure is badly needed

Horizon 2020 success rates in less-developed member states in central and eastern Europe are getting closer to those in the west according to data published recently by the European Commission. However, grant money is not all and structural problems are still making it difficult for these countries to catch up.

Researchers working in the region are doing their best, but cannot reach their true potential unless national governments boost investment in the underlying research infrastructures, to attract more scientists to work there.

In 2016, success rates in winning grants for countries including Romania, Poland and Hungary were between 12 and 16 per cent, while 19 per cent of the projects submitted from the Czech Republic were funded.

Italy and Spain also did well, with 17 and 14 per cent of their proposals, respectively, accepted compared to the EU average of 14.8 per cent.

However, the number of projects submitted by these countries is still low, and more than 60 per cent of applications come from the UK, Italy, Germany, Spain and France.

Poorer member states, hard hit by the economic crisis in 2008-9, have for more than a decade seen the main priority as balancing national budgets and reducing the external debt. Now most of that work is done and the economies of these young democracies are on the up, governments are beginning to focus on investments in research and innovation - and expect the private sector to do the same.

In Hungary, for example, politicians are preaching a new economic philosophy, a shift from “made in” to “invented in” Hungary, to encourage researchers and companies to join forces and innovate their way to the ranks of Europe’s more prosperous nations.

However, Hungary and its neighbours are still far from reaching the three per cent of gross domestic product target set by the European Commission for public and private R&D spending. “Research and innovation is certainly one of the priorities of the government, but not the main priority,” says József Pálinkás, chairman of the National Research, Development and Innovation Office (NRDI).

Pálinkás is hopeful Hungary will reach the three per cent R&D target set by in the next decade. “We cannot increase [the R&D budget] very fast,” he says.

Private companies will also have to catch up and boost their R&D spending, to build up industrial need research. For now, Hungarian companies lack the means to spend a lot on research. While the government can simply make a political decision to increase public R&D spending, “it is another thing to have enough demand for research for private companies,” says Pálinkás.

In the university sectors, rectors also are trying to convince governments to spend more on research.  “Research budgets are not growing sufficiently,” says Marcin Pałys, rector of the University of Warsaw.

Bulgaria has recently cut research funding, while Romania slowed down research budget growth. In Poland, ministers are in favour of increasing research spending, but the proposal has been blocked until budget deficits are fixed. “Other expenses are more important, research is not high on the priority list,” says Pałys.

Howe FP9 can make a difference

As draft proposals for the Horizon 2020 successor, Framework programme (FP9), circulate in Brussels, poorer member states in central and eastern Europe would like to see the 2021 - 2017 programme help them close the east – west research gap.

Hungary and other countries in the region are calling for increased participation of research organisations and SMEs from countries with weaker research and development performance in FP9, to close the innovation gap in Europe.

However, they do not want to compromise on excellence criteria. “Giving more money to those who want to catch up will not help,” says Pálinkás.

Politicians in Brussels and across the continent are facing a grand challenge: finding the right mechanisms to build a more evenly distributed research and innovation ecosystem.

One goal is to make universities in central and eastern Europe more attractive for researchers from across and beyond the EU. But, says Péter Szalay, vice-rector for science at Eötvös Loránd University (ELTE) in Budapest, “We don’t want a special programme.”

Countries like Hungary, Poland or Romania will not be able to improve performance under FP9 and more than they did under Horizon 2020, unless they are able to address important structural deficiencies. “They need time to build critical mass for experienced researchers,” says Pałys.

That means investing more in research infrastructures. “There is no good progress [to] address this issue,” says Pałys. “Some initiatives help bring new talent in, but only [for the] short term.”

Investment in better research infrastructure is also crucial to encouraging more researchers to come back to their home countries.

“Colleagues in the west consider coming back if you fulfill their requirements” Szalay says. He has been trying for a year and a half to keep a promise he made to a Hungarian researcher who wanted to return to ELTE. He undertook to get the researcher the computer needed for his project and had to battle through difficult procurement procedures to buy it. “Procurement procedures for buying big equipment are very difficult,” Szalay says.

Salaries also need to be on par with universities in richer countries. Competing for EU research grants is global and salaries should be global too. “Life is not much cheaper here,” Szalay noted.

NRDI does have some ring fenced money from the national budget to support nationals who are excellent researchers and want to return to Hungarian institutions. “This money should allow us to give infrastructure and salaries for those researchers who want to come back,” says Szalay.

According to Szalay, many ERC applicants from eastern Europe apply to carry out their research at western universities. “Not that we do not produce excellent science, but the infrastructure is less attractive,” he says.

At the same time, universities want to be in a position to attract more international faculty, to boost their attractiveness to other researchers and students, and also to support research collaborations with neighbouring countries.

“You need critical mass,” says Pálinkás. That is still missing in countries like Hungary and Slovakia. Working together could generate that critical mass, and research collaborations could easily be managed among countries in the region.

That is one of the main reasons for Pálinkás’ mantra, “We need to invest in infrastructure.”

As things stand, most researchers in the region see their best opportunities in teaming up with peers from the UK and the US, hoping that will boost the chances of their projects being funded and to get access to better research infrastructures. They could be better off looking for local collaboration partners and pooling resources with neighbouring countries. “Carrying out a project here can be more cost effective than in Switzerland,” Pálinkás says.

There is a suspicion that many excellent projects are rejected because universities in central and eastern Europe do not have an army of EU funding experts who know how to sell an idea and can help their scientists write good proposals. “The science policy office at ELTE has four people who offer support for science applications, while KU Leuven has 40,” notes Szalay.

“That’s life,” says Palinkas. “We have to learn how to sell projects.”

Some institutions have teamed up with more experienced universities in the west to learn how to write successful applications. The Central Europe Leuven Strategic Alliance (CELSA) has a budget of €1 million and offers grants for researchers who wish to start collaborations, work on the first steps of projects and then apply for EU funding. This year, 10 projects will be funded through the programme and the participating universities will be encouraged to share research infrastructures.

To build better research infrastructure and a critical mass of experienced researchers, central and eastern European countries cannot rely only on Horizon 2020, they will also need to boost national R&D budgets and to use EU structural funds.

The Extreme Light Infrastructure (ELI) laser research facilities in the Czech Republic, Hungary and Romania is one example of how EU structural funds have been used to boost research and innovation.

But not everyone is happy with the bureaucratic burden of these projects. “The problem with structural funds is, of course, the huge administrative burden, says Pálinkás. Governments may try to make it simpler, but research projects funded through structural funds, “need strict evaluation and monitoring and that means paperwork.”

The deadweight of bureaucracy is difficult for universities to navigate. Mircea Dumitru, rector of the University of Bucharest says research projects funded through structural funds usually require “hundreds of kilograms” of paperwork.

“It would be very poor politics if structural funds or FP9 were to replace national financing,” says Pálinkás. He is pushing for national budgets to be increased in line with the EU funding programmes. “If the EU budget is increasing, then national budgets should meet that,” he says. 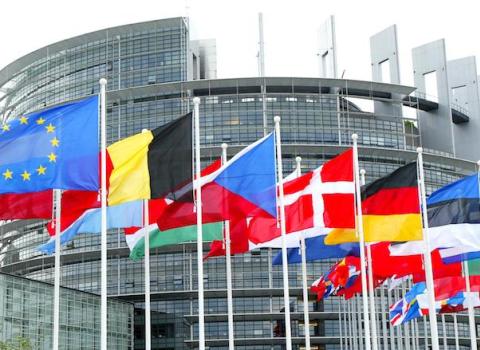