Leaders agree on slimmed-down €80.9B for Horizon Europe

EU heads of state agree on historic budget deal, but partly at the cost of research funding, despite science’s role in fighting COVID-19. Critics say the Horizon budget became a ‘cash cow’ during budget talks.

EU leaders agreed on a pared-back budget of €80.9 billion for the Horizon Europe research programme, in the fifth day of a marathon summit to debate the EU’s long-term budget and a post-pandemic economic recovery plan.

The final figure – a big blow to research advocates - is significantly lower than a proposal of €94.4 billion put forward by the European Commission in May, as the budget for the R&D programme has been cut multiple times throughout the summit.

The Horizon budget was just one piece of a historically large pie that it took EU leaders a record five days to negotiate. The big picture: a total EU budget from 2021-27 of €1.82 trillion, including €750 billion in a special pandemic recovery fund. After the pandemic funding, the biggest pieces of the budget will be agriculture and cohesion, or development, funding. Paradoxically in the midst of a pandemic, as part of the wrangling leaders also agreed nearly to zero-out a special new EU health programme – but that idea ran afoul of member states’ longstanding desire to keep the EU institutions from meddling too much in their national health programmes.

Before the budget summit started on Friday, Horizon Europe was slated to get a €13.5 billion boost from this one-time pandemic fund, but the final budget is bringing that figure down to only €5 billion. According to the final EU Council document, the core budget of Horizon Europe will remain at the pre-summit level of €75.9 billion (in 2018 prices) – but even that represented a cut from the European Commission’s May plan of €80.9 billion.

Despite the drama over the weekend – including the first in-person EU summit since the pandemic began – the budget story is not quite finished. Next, the European Parliament will have a say; and it is usually far more supportive of research funding than the national finance ministers calling the shots behind-the-scenes this weekend. That means the fight for more research money will now move into the Parliamentary committees, setting the scene for an epic show-down between the three biggest EU institutions: Parliament, Commission and Council.

Throughout the summit, the Horizon budget was cut a couple of times, first on Saturday and then once more on Monday. The changes prompted Paul Webb, the Commission’s head of unit for research budget and long-term budget synergies, to say on Twitter that he finds it “disturbing that [Horizon Europe] seems to be the cash cow in the [budget] negotiations.” It is rare for Commission officials to speak out in the midst of Council negotiations – but he has been joined in the past few days by an ever-louder chorus of condemnation from MEPs, the European Research Council’s governing board, and other research advocates.

The new EU budget gives more ground to Austria, Denmark, Finland, the Netherlands and Sweden, who are pushing for fewer grants and more loans in the new pandemic recovery fund. Since Friday, EU leaders argued over the size of the fund, as well as over the rules to disburse the money across member states. Research funding, mostly in the Horizon Europe programme, is just one piece of that overall budget dispute – but became an increasingly visible one as the hours dragged on.

As EU budget negotiations entered a fourth day in Brussels advocates mounted an online campaign to defend the research and innovation programme.

University and business advocates took to Twitter over the weekend to call for more research funding as part of Europe’s pandemic response. EU leaders need to urgently “wake up” and save the bloc’s research budget from a “dismantling” at today’s crunch EU leaders’ summit, says Marta Agostinho, coordinator of EU-Life, an alliance of 14 life science research institutes. “In a time when politicians and citizens look to science to find the miraculous solution to the COVID-19 crisis, the top leaders decide to cut the research budget – how insane is this?” she said.

In real terms, the final Horizon Europe budget is very close to funding levels of its predecessor if the UK’s contribution to the Horizon 2020 budget is also taken into account. According to figures that exclude the UK, presented by the commission, the EU allocated €67.06 billion to Horizon 2020 (in 2018 prices). The total budget of the programme, if Britain’s contribution from 2014 is included, is €76.26 billion.

In the end, the core programme of Horizon Europe will be allocated €75.9 billion and a €5 billion boost from the pandemic recovery fund.

The heart of the argument is a classic geopolitical fight over who benefits most from which parts of the EU budget. Generally, richer countries in the northwest of Europe get most of the research and innovation money, while poorer countries in the south and east get more of the “cohesion” or development money. A third, and biggest, slice of the EU budget goes to agriculture – and beneficiaries for that are scattered more widely, meaning that any EU budget deal is a multidimensional chess game.

Over the weekend, some leaders decried a strategy by Austria, Denmark, Finland, the Netherlands and Sweden – the “frugal five” -  to oppose a budget deal that would allow the EU to give out more grants than loans from a new €750 billion pandemic recovery fund. The original plan was for €500 billion to be provided in grants, and €250 billion in loans.

But over the weekend, EU Council President Charles Michel proposed a compromise converting €50 billion of the grants into loans– but even that did not satisfy the budget hardliners, who called for the grants portion to be much smaller than €450 billion. In the final deal, the fund is made up of €390 billion in grants and €360 billion in loans.

The five countries also demanded that disbursements from the recovery fund should not be made to countries that violate EU standards for the rule of law. And they want more control over how the grant money is spent, rather than leaving it purely to the Commission to supervise.

The impact on research and innovation is complex. The shuffling of grants to loans in the pandemic programme would mean cutting by €8.5 billion a special €13.5 billion boost to Horizon Europe that the Commission had proposed.

As the grants portion was cut further, other programmes with important innovation components also saw their budget slashed.

The budget for EU’s academic exchange programme Erasmus+ will be allocated €21.2 billion, about €5 billion less than initially planned. InvestEU, a scheme to boost private and public investment, could see its budget cut to €6.9 billion. In the European Commission's budget plan, the programme was slated to get €30.3 billion, of which €3.11 billion was ring fenced for research and innovation projects.

The EU4Health programme has been cut down to €1.67 billion, from €9.4 billion proposed in May. The Commission proposed the programme to help cope with the health consequences of COVID-19 on an EU-wide basis, rather than country-by-country. Past attempts to create a sizeable EU health programme had run afoul of member states’ insistence that the EU executive keep its nose out of their national health programmes – but only a few weeks ago it looked like COVID-19 had shifted the political momentum in the Commission’s favour.

Over the weekend, some MEPs pushing for bigger budgets reminded EU leaders that the European Parliament could reject whatever deal emerges from the summit.

In a Twitter post on Saturday, Portuguese MEP Maria da Graça Carvalho, rapporteur of new legislation for the European Institute of Innovation and Technology (EIT), quickly reacted to news that EU leaders could agree to further cuts to the Horizon Europe budget, of which the EIT will be allocated 3 per cent.

"I just want to stress that the European Parliament and the Council together are the budgetary authority," Carvalho said. "The Treaties give the Parliament the right to reject the budget,” she warned.

While it is uncommon for an EU agency to lobby publicly for its own budget, the European Research Council (ERC)’s governing board issued a "plea" that that the agency’s funding to be spared during the negotiations.

"We cannot imagine that EU leaders can agree to this (cut) while at the same time relying on the dedication/skills of Europe’s researchers to fight the ongoing pandemic & be ready to address unexpected future challenges," the ERC tweeted in a post.

Research associations were also quick to express their dismay at how the negotiations were evolving over the weekend.

According to Kurt Deketelaere, secretary-general of the League of European Research Universities (LERU), “the disappointment will be enormous” if the budget is approved in its current form.

Deketelaere admitted the numbers are “looking bad” but said it’s too late to reverse the changes. “A deal is closer than a lot of people think,” he said.

Research lobbies also decry the mismatch between the significant role of research and innovation during the coronavirus pandemic and how politicians choose to reward these sectors in budget crunch talks.

“We need European leaders who understand what will take us out of the current and future crisis,” tweeted Thomas Estermann, director for governance, funding and public policy development, at the European University Association.

"A science and innovation driven recovery is a must for all of Europe. It is particularly in the interests of member states which already invest heavily in R&I," said Jan Palmowski, secretary general of the Guild of European Research-intensive Universities.

Europe's largest business association was also quick to express its concerns over news coming out from the summit. "Cutting Horizon Europe and eliminating solvency instrument [are] wrong places for cuts if we want to have a successful recovery," said BusinessEurope in a statement. 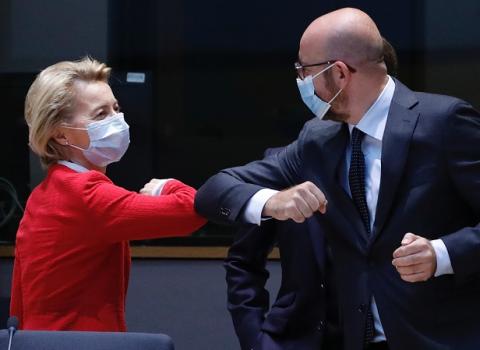 Cuts during budget summit did not stop with Horizon Europe. As leaders were seeking a compromise, certain programmes - including health - took a hit, while space and defence were protected

European Research Council withdraws the grants of 84 researchers based in the UK, as 19 scientists decide to relocate
30 Jun 2022