The European Commission is laying the groundwork for a mega-investment fund that would drastically shake up the EU funding landscape, according to a draft working document seen by Science|Business.

The fund, with the working title ‘InvestEU’, would integrate or abolish many of the financial schemes Brussels runs today and be the single entry point for EU investment support in the form of loans, guarantees and equity after 2020.

The proposal, being developed inside the Commission’s Directorate‑General for Economic and Financial Affairs, would steer investment under four broad policy headings – infrastructure; research and innovation; small and medium-sized enterprises; and social, skills and human capital. The aim is to simplify, provide stronger management and remove bureaucracy, amid what the document calls a “subdued” economic recovery in Europe since the financial crisis.

The fund would guarantee projects, managed by the European Investment Bank and other banks, that would be riskier than usual, raising the rest of the money from private backers.

The document does not say how much private investment InvestEU would be expected to spawn (for the Juncker Plan, every €1 put in is expected to generate €15 of investment). Member states would continue to offer banks operating under the fund a pipeline of deals. The fund would in particular target “very high risk and first-of-a-kind projects.” That would include projects funded through the new European Innovation Council, which is set to start issuing grants after 2021.

Commission officials declined to comment on the paper, which is due to be published in June. The European Council and Parliament will then debate the plan before it takes effect in 2021.

“The post-2020 investment support scheme must be focused, simpler and more transparent,” the document says, and “address the problem of the current multitude of EU-level financial instruments and applicable rules.”

Investment schemes have mushroomed in Brussels and during the 2014-2020 budget period, the Commission established 16 new ones.

In all, the EU oversees almost 40 financial instruments, including the giant European Fund for Strategic Investments (EFSI), or Juncker Plan, Horizon 2020’s InnovFin and three budgetary guarantees and guarantee funds that together amount to a share of around 4 per cent of the current EU budget.

EU officials acknowledge that the overall picture is perplexing. The large number of instruments and the divergent rules applying to them, has become “an obstacle to their efficient use”, the EU concluded last year.

Instruments that were supposed to be complementary are sometimes in competition. The Horizon 2020 interim evaluation, for example, found that "since the set-up of EFSI in 2015, it has proved challenging to reach InnovFin's objectives, as a significant part of the products deployed overlap with EFSI in terms of both risk spectrum and eligibility.” 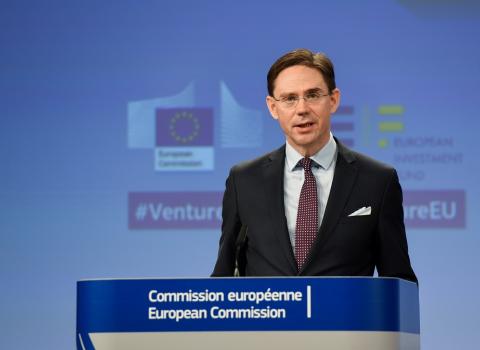 Jyrki Katainen tells MEPs they will retain scrutiny over the InvestEU umbrella fund, under which the Commission is proposing to centralise all EU investment schemes