As one of the seven founders of the ITER fusion experiment conceived during the Cold War, Russia cannot be excluded from the project. But Europe may move to limit its participation

As the world cuts Russia off from more and more joint research and innovation projects following its invasion of Ukraine, there’s been deafening silence from the ITER megaproject that is seeking to demonstrate the potential of nuclear fusion by building the world’s largest tokamak in south west France.

ITER was jointly conceived and pushed forward in the midst of the Cold War by US and Russian leaders Ronald Reagan and Mikhail Gorbachev. It was a major moment for science diplomacy, but today the future of ITER as a channel of cooperation between Russia and the west is in question.

Along with cuts to research ties mandated by government across Europe, Russia has been axed from other big collaborative research projects. Last week, the particle physics lab CERN suspended Russia’s status as an observer to the organisation. A week earlier, a European project, the X-ray Free-Electron Laser, said it will not start new agreements with Russian institutions and was suspending existing ones.

Ukraine’s Council of Young Scientists has called for Russia to be banned from ITER, but this may not be so straightforward. Russia, alongside China, the EU, India, Japan, Korea and the US, is one of the seven founders of the 35-year project. In effect, this means there is no way to exclude it from the project completely.

“There is no provision in the ITER agreement that would allow the exclusion of one of the signatories,” Jan Panek, deputy director general responsible for nuclear energy, safety and ITER at the European Commission, told the European Parliament’s energy, industry and research committee ITRE meeting about fusion energy on Tuesday.

Unlike at CERN, Russia does not just have observer status, but rather is an active contributor to the construction of ITER. For example, it is a major supplier of the niobium-tin superconducting material for ITER’s magnets and is manufacturing crucial components including gyrotrons, the energy-generating devices in the electron cyclotron resonance heating system. Russia will supply eight of these devices in total, one third of the total installed capacity on the ITER machine.

Russia also has constructed and tested a full scale prototype of the ‘director dome’ the component at the base of the plasma chamber that extracts heat and ash produced by the fusion reactor. This was delivered from Russia to ITER in December 2021.

Apart from being so inextricably linked with the construction of ITER, sanctioning Russia will be difficult, given other members including China and India have not condemned the invasion of Ukraine. Panek said the governing statutes mean some form of sanction is technically feasible but  finding a compromise between all the participating countries will be difficult.

“It’s not an easy subject. You can imagine that in an organisation that has seven stakeholders including not only Russia but also China, India, in addition to the US, Europe, Korea and Japan, it has to be the result of a very sensitive discussion,” said Panek.

One way the EU can make a move is through limiting its own cooperation with Russian companies in the France-based project, Panek noted. “The final layer is the participation of Europe in the project, the deliveries that we make to Europe and the extent to which we may change our policy that in the past was open also to collaboration to Russian companies.”

Here, Panek said, no official EU sanctions apply to fusion technology. But as the invasion turns increasingly more bloody, the sanctions keep tightening, with the fourth round of bans on trade with Russia published by the European Commission on Monday.

The current goal is to power the ITER machine for the first time in December 2025. However, this is now looking unlikely due to delays caused by supply issues brought on by the COVID-19 pandemic and the uncertainty that comes with such first-of-their-kind projects. Panek says ITER is now in the process of rethinking timelines and budgets. 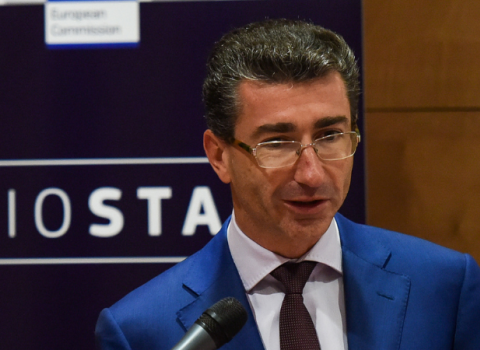