Why fund research? A guide to why EU-funded research and innovation matters

How much of EU's next budget should go to research and innovation? 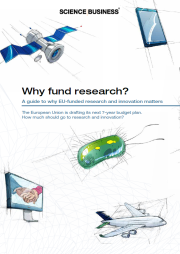 Since their founding, the European institutions have been spending money on science and technology. Why? What do we get from it? And why not leave it to national governments or the private sector? This report aims to answer as succinctly as possible.

Asking such questions matter – if only because the money involved in European Union research and innovation (R&I) is huge. The largest EU R&I programme, Horizon 2020, is slated to spend €77 billion from 2013 to 2020, or an average €11 billion a year. And the budget has grown spectacularly – nearly fourfold since 2006. So, clearly, the EU member-states that pay the bills for this think it’s worthwhile. But are they right?

This guide is designed to inform the above discussions by laying out the case for expenditure on research and innovation. In the past decade, as science and technology funding around the world has climbed, the number of economic studies of R&I policy has risen even faster; there is by now a sizeable body of literature, on which this report draws. We have also drawn on the views of our members – the more than 50 universities, companies and publicsector organisations that belong to the Science|Business Network (though, as with all our reports, this document does not necessarily reflect the views of any individual member), as well as our Big Science report (Science Business Publishing, 2015).