This publication is free for Science|Business members. 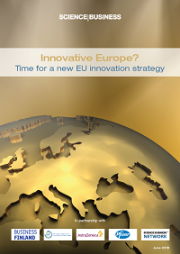 Science and technology are important; we all know that. But do our governments?

Dozens of indicators show how science and its manifold applications underpin our lives.  Global R&D expenditure has soared, to nearly $1.7 trillion, according to UNESCO.  The mere act of developing new technologies now accounts for 2.23 per cent of the global economy; and the results of that R&D, from BMW to Facebook, dominate trade and reshape our lives.

Yet most governments approach these trends in a piecemeal fashion. In most capitals, the task of managing the R&D enterprise is relegated to a politically weak ministry of research or a collection of specialised agencies, while all the ministries that use the technologies – from health to agriculture – continue operating in their own policy clouds.

The global value of innovation

The risk of this policy anarchy is clear. We have a global crisis of antimicrobial resistance partly because agriculture ministries don’t talk to health ministries, and in many countries had long allowed their farmers to pump human antibiotics into cows to fatten them faster. We have a climate problem partly because energy and industry ministries didn’t listen to the warnings of environmental or research ministries, and the experts they funded. Income inequality in the developed world certainly isn’t helped by the way finance, economics and social ministries do most of their work in isolation. Of course, for these and other policy failings of the past half-century, there are many other causes besides government disorganisation, such as industry lobbying, political opportunism and social inertia. But chaos at the centre of government doesn’t help.

Brussels is a special case of this wasteful “silo” thinking. The European Commission has 28 commissioners, 34 directorates-general and more than 40 executive agencies. That’s a lot for an organisation that spends €160 billion a year (by comparison, that’s about the size of just one multinational, General Motors).

In one corner of this policy scrum is the directorate-general responsible for research and innovation. The budget for its main charge, the Framework Programme, has been climbing fast, to more than €11 billion a year. And on May 2d, the Commission proposed another big rise, to an average €14 billion a year during the 2020s. But this sits alongside even bigger sums spent by other parts of the Commission on farm subsidies and regional development, and separate budgets large and small for foreign affairs, international aid, healthcare, transport, urban planning, climate and much more.

There’s a history of EU leaders talking about the need for better coherence in these funding streams, particularly around research and innovation. In 2014, the Commission started to make some regional development money conditional on local officials developing a plan for innovation; and it dedicated a small budget to promoting innovation in agriculture. In planning its grant programmes, DG Research has involved officials in other departments; and in some cases, programme decisions are actually taken by those departments. An elaborate, bureaucratic system of “inter-service consultation” greets every research plan. But there are impenetrable barriers to real coordination. The directorates-general are in competition for budget and power (the turf war between the research and digital departments is legendary in Brussels.) And even if there weren’t constant kibitzing from the member-states, a further obstacle is the different legal bases for each programme, with corresponding differences in regulation and administration.

But this should not be an argument merely about research money; what matters far more is how well the fruits of science are integrated into the fundamental policies of the Commission. When considering pesticide or auto-emissions regulation, is the EU incorporating all the best scientific evidence? Are trade negotiators looking ahead to the future impact of artificial intelligence, gene-editing or climate change on the treaties they are drafting today? Are health, social security and defence ministries – the three biggest budget items in every developed country – looking closely enough to how they could save money by greater collaboration in Brussels? Here again, there have been some notable efforts. The European Defence Agency is slated in the next decade for collaborative research funding of more than €500 million a year (but in perspective: that’s about 0.1 per cent of European military budgets). The Commission’s Joint Research Centre and its Scientific Advice Mechanism are generating ever-more focused studies applying science to policy questions – but their impact so far has been limited, with most of their attention directed towards relatively narrow, technical questions. When it comes to the really big policy fights, no politician wants a pesky expert upsetting the terms of debate.

But hope springs eternal. The issues of synergy and coordination are back in Brussels. On budget, the imminent loss of Britain’s budget contribution is forcing Commission officials to rethink the way they and their programmes work together. In its May 2 budget announcement, the Commission vowed a cut in the number of legal “bases” for its programmes, to make it easier to move money and grantees around. Jean-Eric Paquet, the new director-general for research and innovation, is promising a more “joined-up process” in programme planning, with other parts of the Commission.

And among many leaked budget documents circulating in Brussels this Spring have been promises for a new, “strategic planning process” for the next Framework Programme, Horizon Europe. It will, one draft document says, “be co-created in synergy with other EU programmes and policies, with the intention of giving coherence to the entire portfolio of actions supported by the EU under the MFF”, or Multiannual Financial Framework. “The process will be streamlined into a single Commission document,” with “a simpler governance structure.” In theory, that sounds great – but the details will matter. And, of course, this new process is promised only for Horizon Europe; there is little mention in the EU’s planning documents about similar, cross-silo planning to take place in other parts of the Commission.

What we are still awaiting is a truly comprehensive strategy for research and innovation – that modernises the way the Commission develops its policies in every field.

It’s time for a more comprehensive innovation policy in Brussels. The Commission is promising it. Can it deliver?

2. The next EU research budget

3. Can regional development be ‘smarter?’

In its budget plans, the Commission has big promises about its research and regional funds working smoothly together. How?

Development, agriculture, health and other fields are all ripe for greater strategic planning of research and innovation. But how?