The Dutch push to reframe healthcare around patients

A special report of the Science|Business Network

The Netherlands has embarked on a five year national plan to use health data to improve outcomes for patients and increase the cost effectiveness of its healthcare system. In this report, public health experts and patient representatives discuss progress to date 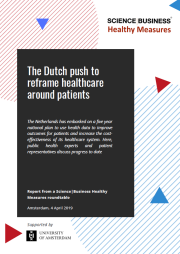 Value-based healthcare rests on the premise that what is not measured cannot be managed. The concept, first articulated by Harvard Business School professor Michael E. Porter, requires that assessing patient involvement and experience of care becomes an explicit goal for hospitals.

Health professionals in the Netherlands have spent the last few years working with patients to determine the outcomes that matter to them the most. It’s part of a growing trend in healthcare to take more account of the views and preferences of patients, and encourage people to make their own judgments about which care they receive. Exponents of this method say medical interventions should help patients live longer, but also deliver broader wellbeing.

There is now a number of experiments in this field in the Netherlands, where satisfaction with the health service is already above the OECD average. Outcome based healthcare is being piloted at clinics and hospitals around the country, with teams collecting and analysing data on how budgets are spent, and what results they’re getting.

The Dutch government is investing in the approach. According to a national five year action plan launched last year, the goal is to show that outcome-based healthcare “is possible”. However, it is acknowledged the theory doesn’t yet mesh with reality.

"The proof of concept still needs to be realised,” said Dennis van Veghel, director of the Netherlands Heart Registry, which collects and publishes data on the outcomes that matter for heart patients in hospitals around the country.

While Van Veghel believes in the concept, he acknowledges that, “There’s not an example anywhere in the world where all the elements of value-based healthcare come together. Whether it’s the holy grail or not, we just don’t know yet.”

Shedding long-held ways of doing things will take some time, but there is some early progress to report. “We’ve made a big step forwards,” said Martine de Bruijne, professor of public health in the Amsterdam public health research institute. “We increasingly include the patients’ voice as routine in treatment and outcome evaluation. But if you really want to implement this approach, we need to reorganise our systems and  collaborate way beyond the walls of hospitals.”