The conduct of science in times of war

The invasion of Ukraine has prompted a wave of measures to isolate Russia’s scientific establishment. As geopolitical tensions mount, we must seek global agreement on how researchers can continue to operate, without aiding an aggressor or hampering science. 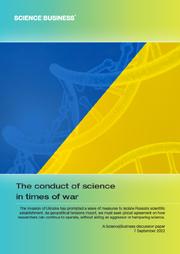 In the wake of Russia’s 24 February 2022 invasion of Ukraine, allied governments rushed out a series of “science sanctions”, restricting scientific collaboration as part of a broad campaign of economic and trade penalties designed to deter Russia. While there are some historical antecedents, the nature and breadth of these measures were unprecedented in the scientific community. Now, many ask: how have they affected Russia and Belarus? What impact might they have on current or future science, globally? With geopolitical tensions rising on many fronts, does the world now need some standard, guiding principles for the conduct of science in future conflicts?

This paper, based on reporting by the Science|Business news service, proposes a global effort to answer these questions. Amidst the chaotic launch of the Ukraine war measures, clear divisions of opinion within the European research community emerged over the design and scope of policy for the scientific community. Eventually, a kind of consensus gradually emerged – at least among developed-world governments: focus penalties on Russia’s scientific institutions, rather than individual researchers. But in parts of the developing world, attitudes differed: What good, to poorer nations or humanity generally, would come from what some call  a scientific “iron curtain”? Now, with the prospect of conflict rising elsewhere, between China and the US or Iran and Israel, we must think through these issues carefully and systematically. We propose a few simple steps to develop some guiding principles on the proper conduct of science in wartime:

Action on these points is made more urgent by the historic growth of open science, which has transformed the conduct of research across the globe. In just the past few years, we have seen the dramatic benefits of openness for the development of COVID-19 vaccines, the understanding of climate and biodiversity change, and the spread of green, equitable environmental and social policies. War can halt or reverse such progress. Together, we must find a way to keep the benefits of scientific collaboration and openness, without condoning or aiding aggression.

Contributors to this paper: