The Case for the Cloud

The Commission’s cloud project could draw on Europe’s strengths in science to improve overall competitiveness – and change the way science is done in many disciplines. So concludes a special report from the Science|Business Network’s consultation group on the science cloud. 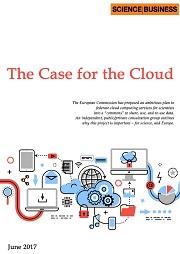 In April 2016 the European Commission laid out a broad vision of how cloud computing can transform the way science is done in Europe. The plan, for a European Open Science Cloud, would federate existing online services and stimulate new ones so researchers – in any domain, country or discipline – can easily share data, tools and knowledge. The goal: a science “commons.”

These are ambitious plans. If successful, the EOSC could make today’s science more efficient, and tomorrow’s revolutionary. It could lay the groundwork for a new century of European leadership in global science. To start, the Commission proposed a budget of €6.7 billion, and has been forming committees and plans to get it up and running by 2020.

But there are many obstacles – mostly political and economic, rather than technical. Cloud computing is, by now, a massive marketplace around the world, with well-proven technologies. Hundreds of Europe’s top laboratories, universities and research organisations already make use of the cloud. But their systems are mostly incompatible; and many scientists remain reluctant to put their precious data online. A maze of EU and national regulations – on data protection, privacy and copyright – will need to be navigated. Financial concerns abound: Who will pay for these services, and how? And then there are politically thorny issues of trade and industrial policy: How open, to researchers and suppliers internationally, will the EOSC really be?

With so many questions unanswered, Science|Business has organised a unique, independent consultation group – representing research, industry and policy. By pulling together private and public sector thinking into one common statement, the group breaks new ground, while paving the way for the partnerships between policymakers, academia and businesses that will be needed to make the EOSC work. The European Commission will require the wholehearted support of all three sets of stakeholders to fulfil its goals of making the sharing and analysing of large volumes of scientific data, results and tools easier, more efficient, cost-effective and sustainable. The overarching objective is to enable researchers in Europe to get access to research data from any lab or scientific discipline with just a few clicks. The EOSC could also enable the EU’s 1.8 million researchers and 70 million science and technology professionals to access computers that offer cutting-edge speeds, and save on purchasing new equipment and costly software upgrades.

The Science|Business-convened group enthusiastically backs the EOSC concept, and will in coming months produce a series of expert opinions on the various challenges raised by the project. But first, the group believes it helpful to outline some practical examples of how the EOSC could change aspects of European science, before presenting a so-called SWOT analysis, identifying the strengths and weaknesses of European science, together with the opportunities associated with the EOSC and the threats that could result from inaction or poor implementation.