Buzek, Ehler and Nica are standing again in European elections in May. Rübig, Reda and Henkel are bowing out

Fewer than half of the current 66-strong European Parliament research and industry committee (ITRE) have confirmed they are standing for re-election in May, while 14 say they definitely will not stand, and others are awaiting confirmation they have been selected, or deliberating for other reasons.

The chair of the committee, Poland’s Jerzy Buzek, viewed as instrumental in advancing legislation on the EU’s next research programme, Horizon Europe, is running again, but one of four vice-chairs is standing down.

Other longstanding research advocates in ITRE who are running include Germany’s Christian Ehler and Romania’s Dan Nica. These two MEPs together drafted Parliament’s position on Horizon Europe, the EU’s 2021-2027 research programme.

Included in the group of 14 confirmed not to be standing are some big names like Germany’s Julia Reda, known for leading opposition to Parliament’s recent, sweeping online copyright reform. Her staff say she is considering a PhD at MIT.

ITRE vice-chair Hans-Olaf Henkel, a strong and often critical voice on EU research over the past five years, will not be running again. Nor will Paul Rübig, former chairman of the Parliament’s Science and Technology Options Assessment panel, which studies the scientific or technological aspects of legislation.

Then there are British committee members, who do not know if the UK will participate in the elections. Prime minister Theresa May does not want to, and her request last week for the date of the UK’s withdrawal to be extended to 30 June was intended to avoid it, but there is the possibility that the EU insists on a longer extension when the EU Council meets in emergency session to discuss the issue on Wednesday.

At least nine MEPs are more than willing to stand, provided their national parties pick them again as candidates. The next couple of weeks should pad the field, with MEPs from Italy and other EU countries discovering whether they have been selected.

Current members of the committee hoping to get re-elected will not be on the next ITRE committee by default, and with so many unconfirmed or uncertain, it is too early to say how the political make-up of ITRE will shift.

Below, a full account of who’s in, who’s out - and who’s somewhere in between. 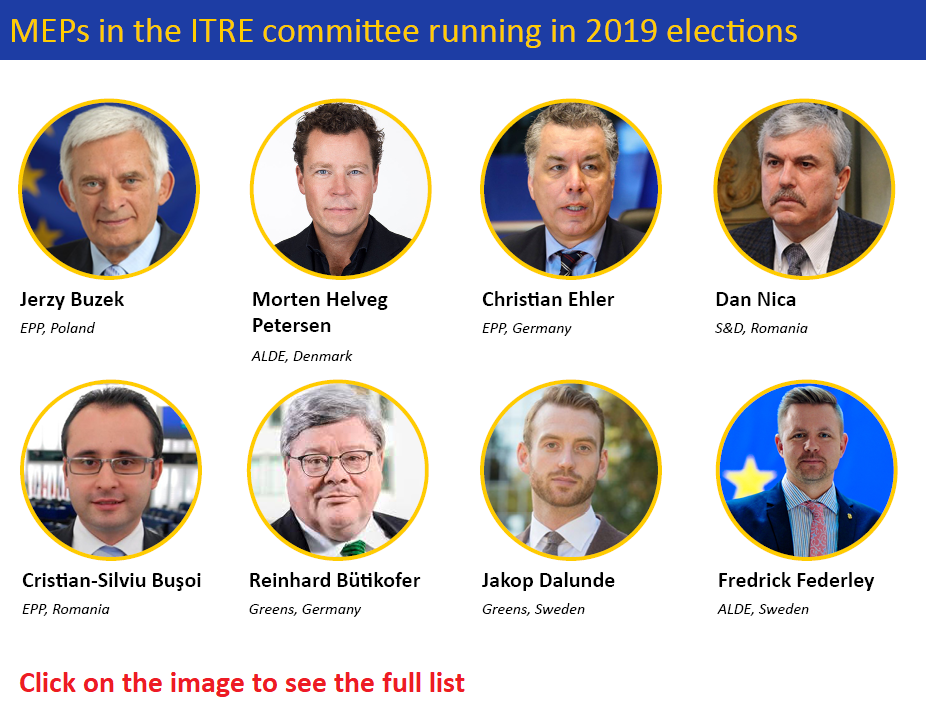