New models are needed for translating open science to innovation

Internet-enabled forms of scientific collaboration, popularly referred to as open science, have not automatically translated into innovation. We must adapt by inventing new types of institutions, says Henry Chesbrough, father of open innovation
By Éanna Kelly

Open science - the idea that wider, faster, and cheaper access to new data will promote more rapid understanding and application of science, is of the moment.

The proliferation of public scientific databases, open access online journals and articles, combined with low cost internet access, gives people access to a wealth of knowledge that was once far more expensive and time-consuming to reach.

The movement is finding expression in journals such the Public Library of Science, for scientific articles. It has also prompted new initiatives like the Research Data Alliance, for sharing the source data collected by scientists, so that research data and research methods that lead to new knowledge can also be shared.

With crowd science contributions can be made by non-scientists all over the world. In biology, programmes like FoldIt enlist ordinary contributors to solve complex protein folding problems. In neglected diseases, open science is finding new application.

From its inception, the European particle physics centre CERN, made provision for widespread access to and publication of its research results, and invited participants from all over the world to join in the project.

The norm of openness enabled significant contributions by very large numbers of participants, with the two foundational papers noting the discovery and verification of the Higgs boson, CERN’s fundamental particle discovery, each having around 6,000 authors.

Where is the innovation?

While an open philosophy of science has advanced impressively in the past two decades, one cannot yet claim that it has led to a similar increase in innovation.

There are straightforward reasons for this.

Once a new discovery is made, it is often unclear, or of less importance to the researcher(s) how best to apply it. Understanding the behaviour of a new material, or a new physical property, may say little about the best uses of this knowledge. What are the applications of the Higgs boson?

There are other barriers as well.

Funding is an important one. Basic scientific research is usually funded by public agencies, usually employing a peer-reviewed process. This funding typically ends when a new discovery is made and then published.

Intellectual property (IP) can be a problem too. In open science, ownership of a discovery is explicitly eschewed, in order to promote the rapid verification and more rapid spread of new knowledge. Assigning IP rights during the scientific discovery process throws sand in the gears of open science, inhibiting the free exchange of ideas and knowledge that lead to faster, better science.

What is needed, then, in developing innovations from open science, is a set of corresponding institutions for open innovation.

Like open science, open innovation assumes broad and effective engagement and participation in the innovation process. The concept says that it makes absolute sense to collaborate with outsiders, be they universities, suppliers or inventors. It also offers them a share in the rewards, including IP rights.

Many of the ideas of open innovation are being pioneered in Europe – perhaps because of the now-common belief among European policymakers that the EU suffers from an innovation gap with the US, and a rising challenge from China, and so must invent new methods to remain economically competitive.

Among the most interesting experiments in open collaboration is a new initiative by a group of big European research labs, including CERN, the European Synchrotron Radiation Facility and the European Molecular Biology Laboratory. Called ATTRACT, the initiative aims to take technologies that the labs have developed for their own infrastructure and spin them out to the market, in partnership with SMEs, multinationals and other private investors.

Through its design, ATTRACT shows how open science and open innovation can be combined in order to generate new business opportunities. These include world class detector and imaging technologies, the use in physics in health applications, high performance materials, and ICT applications.

IMEC is another good example. Founded in 1974 at KU Leuven, the top-rated university in Belgium, IMEC has been effective over the years in combining basic academic research in microelectronics and nanoelectronics, and developing it into practical semiconductor technologies now used by many of the largest ICT and chip companies in the world.

The European Commission has been getting in on the act too. In 2008, it created an open innovation programme, in the European Institute of Innovation and Technology (EIT). It pulls together large companies, SMEs and universities into networks that span the EU, developing commercial products from university research, and training a new generation of entrepreneurs to take these and other products to market.

These institutional experiments necessarily involve substantial trial-and-error but already we can get some ideas about which markets are adapting the best.

The ICT sector is the fastest-moving, and new innovations can often be deployed and scaled here in short amounts of time.

Materials take longer to scale into large markets, because the material must first be proven, and then multiple applications must be attempted. The eventual market size will depend on the success of the various uses of the new material.

The health sector is the most regulated, and market success here will require acceptance by industry and adoption by both regulators and health care system administrators and payers.

The practice of science has come a long way from the days when it was controlled by a select few.

As knowledge monopolies and oligopolies of the earlier period give way to a more scattered division of innovation labour, a process of discovery will be needed, around the world, to find and tailor the best possible models for these institutions to meet the pressing needs of the global economy.

Europe has made a good start.

Henry Chesbrough, who coined the term open innovation, is a professor at ESADE business school in Barcelona and Faculty Director of the Garwood Center for Corporate Innovation, Haas School of Business, UC Berkeley. His books include ‘Open Innovation’ and ‘Open Business Models’.
Innovation
Science|Business Events 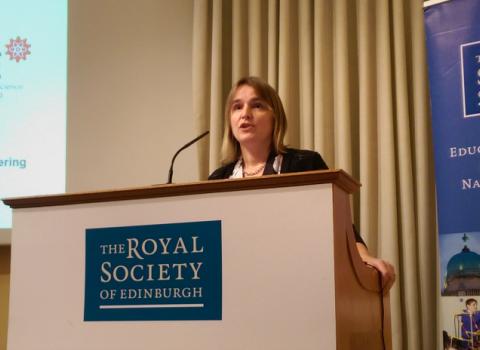