Science|Business pores over the contents of the main party groupings’ short manifestos, finding common goals and little appetite for controversy

The five short election manifestos released by parties of the left and centre of the European Parliament in advance of next week’s election on 22-25 May, play it safe and prescribe mostly similar aims for innovation.

In the pledges of the European Left (GUE), the Greens, the socialists (S&D), the liberals (Alde) and the conservatives (EPP), green technologies receive the most support overall, but general pledges largely take the place of any specific pronouncements.

Mention of the digital economy is surprisingly reserved. Given its prominence in the Commission president campaign, with various candidates calling on Europe to create the next Facebook and Google, glimpses of policy in party platforms are of the “blink and you’ll miss it” variety.

The only apparent point of divergence is in attitudes to the EU-US trade negotiations, in the Transatlantic Trade and Investment Partnership (TTIP), which promises to make it easier for European companies to sell products in the US.

The parties of the right of the parliament, the Europe of Freedom and Democracy (EFD) group, fronted by British United Kingdom Independence Party (UKIP) leader Nigel Farage, and the European Conservatives and Reformists (ECR), an anti-federalist alliance set up by the British Conservatives in 2009, have not published any manifestos. This makes the EPP the only party of the right to do so.

Out on the hustings, it’s clear that MEPs seeking re-election are not fully walking the delimited party lines as outlined below. Personal opinion and their own track record in parliament appears to be a more reliable guide to election priorities.

What do they say?

Underneath the patina of can-do energy and ambition, and with an eye to not offending anyone, party pledges for any election always risk over-generalisation.

Within the European Parliament, this is especially true – treading carefully is the name of the game.

European parliament party group pledges have to find broad approval by so many constituent members across all countries – so it’s little wonder that they shirk any controversial areas. Both the S&D and EPP platforms use the most restrained language and this is a direct reflection of their relatively large sizes.

Similarities and small differences are found across the broad areas that touch on innovation policy.

Support for SMEs and universities

The S&D platform avoids risk by pledging to, “prioritise innovation, research, training and a smart reindustrialisation policy” and provide general support for SMEs.

Neither party has anything of significance to add on universities.

Alde go a little further with a commitment of, “easier access to finance and simpler rules for investment.” They produce the only discernible real policy in this area with a promise that, “dual training between universities and enterprises” would be strengthened under their watch.

GUE calls on the European Central Bank (ECB) to, “fund projects that create decent jobs (in industry, research, new modes of production) and public services at national and European level.”

Unsurprisingly, the Greens emerge with the most vocal declaration of intent here, calling for no less than a, “Green renaissance of our industry."

They strike a forthright tone: “Yes to renewables and energy efficiency; yes to phasing-out nuclear and coal and no to shale gas” and take a rather stiff-necked view of the International Thermonuclear Experimental Reactor (ITER) saying investment in the project should be scrapped.

They are the only party to mention green transport and advocate spurring innovation, “by making electric bicycles, tramways and trains, electric cars, all bases on renewable sources, more attractive options.”

Alde would like to see investment in electricity grids and the development of carbon capture and storage technologies. They also support the recent shift in focus in structural funds into financing renewable energy projects.

The Liberals and the EPP speak of the TTIP in enthusiastic terms. But the EPP warns that the agreement must, “protect Europe's high standards” and safeguard, “important elements of our European identity”.

The socialists show their skepticism, saying any agreement, “must be bound to the protection of people´s human and social rights, decent work, environmental standards, culture as well as corporate social responsibility and fair trade.” They stop short of condemning it.

The Greens warn that they, “oppose TTIP in its current form” but the GUE is the most strident on this issue promising to, “Immediately stop the negotiations on the agreement.”

Alde fully endorses an economy with faster internet and more e-services and e-commerce. Re-directing some of the €40 billion spent on the Common Agricultural Policy (CAP) towards these goals would be a good start, they say.

The EPP says more collaboration on digital technologies, is “central to the creation of new digital jobs.”

The socialists and greens, conspicuously, have nothing at all to say on the digital economy beyond supporting citizens’ privacy while they browse online.

MEPs not restrained by manifestos

Manifestos, of course, only capture the abstract staging posts for the election. Across the continent, the race for re-election is, by necessity, much more nimble.

Despite the safety-first approach of the two main parties, S&D and EPP, its members are not shying away from promoting their own policies on the hustings.

With the EPP largely silent on climate change, a reflection of the division among its members over emissions reduction targets for 2030, Alejo Vidal-Quadras, Spanish vice-president of the European parliament and member of the EPP, doesn’t feel the same restriction.

An enthusiastic supporter of the decarbonisation agenda, he tells Scicence|Business that, “it is essential to focus on making fusion feasible as well as addressing renewables' shortcomings, especially in the transport sector, in which I see great potential for advanced biofuels.”

“Since 2007, actions by the EU have reduced the time and cost involved in starting a business from 12 days to five days and from €485 to €372,” she said. “The aim is to bring that down to three days and €100, but only three member states have fully complied. This target needs to be more vigorously enforced.”

One effective guide on how seriously to take each manifesto is party voting clout in the last parliament.

By far the biggest group in the last European Parliament, the EPP also won the largest number of votes in the plenary sessions, 90 per cent.

The Alde group, although third in terms of size, comes second in terms of won votes, with 86.55 per cent, while S&D stands at 83.51 per cent. 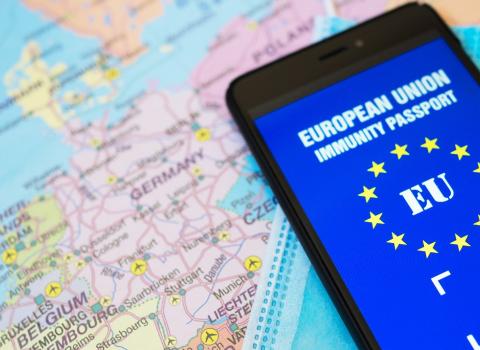 Digital immunity passports for COVID-19? Experts are not sold on the idea
04 Jun 2020