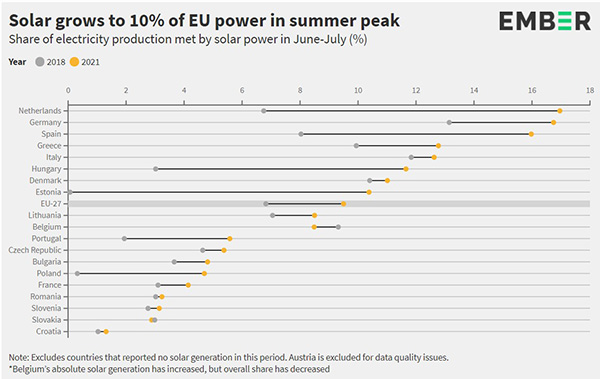 Solar power accounted for 10% of electricity produced in the EU this summer, a new peak, according to the energy think-tank Ember.

The contribution of solar power to the EU electricity mix has been growing year by year, and reached 39 terawatt-hours (TWh) in June and July this summer, compared to 28 TWh in the same period in 2018. And it’s growing faster: solar power production increased by 5.1 TWh between June-July 2020 and 2021, significantly more than the 3.1 TWh year-on-year change seen from 2019 - 2020.

The Netherlands, Germany and Spain are in the lead, generating as much as 16% of their electricity from the sun power. For the Netherlands, this marks a massive boost, with solar energy production jumping from under 7% in 2018 to 17% - and top of the league - in 2021.

The second biggest overall jump in solar power production was in Hungary, which quadrupled its solar share since summer 2018. Estonia has also made major progress, having gone from near-zero solar in 2018 to 10% this summer.

There is much further to go. Solar power production needs to double by 2030 to meet Europe’s climate goals. Despite recent gains, the EU’s electricity grid remains dominated by coal power, which generated 14% of block’s electricity in June and July of 2021. And being summer, electricity demand was relatively low.

The economic incentive is there, with solar energy now cheaper than ever. In Germany, the UK, Italy, France and Spain electricity generated by new solar panels is half the price of that from coal.

“The cost of solar power has tumbled in the last decade and we are seeing the first signs of Europe’s solar revolution in countries like Spain, the Netherlands, Hungary and even coal-heavy Poland. However, there is a long way to go before solar provides more power than fossil fuels, even in the height of Europe’s summer sun,” said Charles Moore, Europe lead at Ember.