Total: Launch of the innovative European “3D” project for the capture and storage of CO2 on an industrial scale

A consortium of 11 European stakeholders including ArcelorMittal, Axens, IFP Energies nouvelles (IFPEN) and Total, is launching a project today to demonstrate an innovative process for capturing CO2 from industrial activities—the DMX™ project. It is part of a more comprehensive study dedicated to the development of the future European Dunkirk North Sea capture and storage cluster.

The “3D” project (for DMXTMDemonstration in Dunkirk) is part of Horizon 2020, the European Union’s research and innovation program. The project has a 19.3-million-euro budget over 4 years, including 14.8 million euros in European Union subsidies. Coordinated by IFPEN, the “3D” project brings together 10 other partners from research and industry from 6 European countries: ArcelorMittal, Axens, Total, ACP, Brevik Engineering, CMI, DTU, Gassco, RWTH and Uetikon.

The objective is threefold:

The “3D” project’s ambition is to validate replicable technical solutions and to achieve industrial deployment of Capture & Storage technology around the world. It should play a major role in enabling industries with high energy consumption and CO2 emissions, such as the steel industry, to reduce their emissions. This project is an essential lever for meeting the targets of the Paris Agreement on global warming.

1Research project for the capture, storage and reuse du CO2 in Norway

CO2 capture and the Carbon Capture & Storage (CCS) process
Capture consists in extracting the CO2 produced by large polluting industrial units, then putting it under pressure before injecting it into a geological storage area. In post-combustion capture, the CO2 is separated from other gases by absorption in a chemical solvent. Currently, the challenge facing research is to significantly increase the energy performances in this stage, the costliest part of the CSC process, to make this process more competitive. 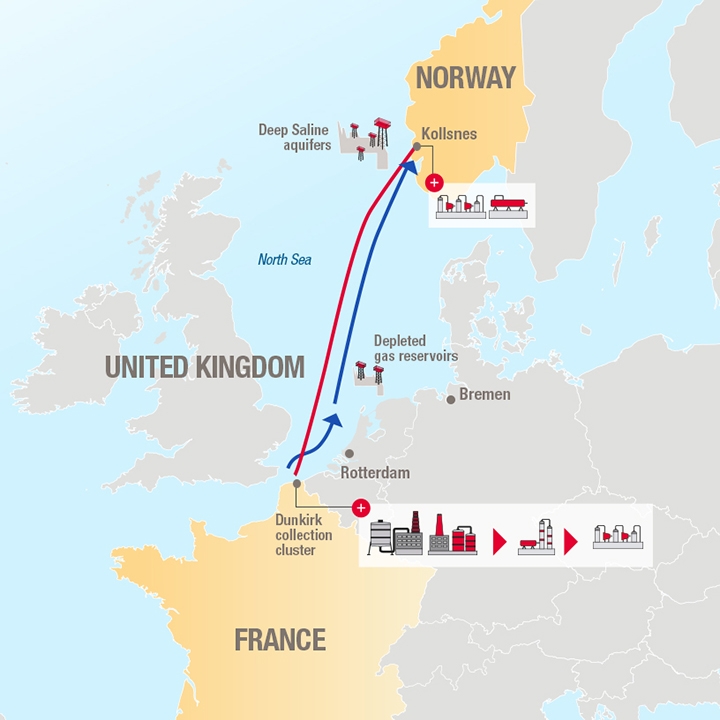 About Total
Total is a major energy player, which produces and markets fuels, natural gas and low-carbon electricity. Our 100,000 employees are committed to better energy that is safer, more affordable, cleaner and accessible to as many people as possible. Active in more than 130 countries, our ambition is to become the responsible energy major.

Total and Carbon Capture, Utilization and Storage (CCUS)
“Commercial-scale pilots, such as Dunkirk’s, are vital to make carbon capture, utilization and storage technologies more competitive, supporting the growth of low-carbon industry,” points out Marie-Noelle Semeria, Senior Vice President and Group Chief Technology Officer at Total. “Total aspires to become a major player in CCUS technologies, which are vital to achieving carbon neutrality in the second half of the century, and we are happy to be involved alongside our European partners.”

Total spends 10% of its R&D budget on carbon capture, utilization and storage technologies. We want to help curtail global carbon emissions and set the stage for new business opportunities through our R&D program. We are involved in innovative initiatives ranging from basic research in conjunction with world-renowned universities to commercial-scale working projects.

This release was first published 28 May 2019 by Total.