Concerns over a ‘no-deal Brexit’ are causing companies to tighten their belts until the UK finds its way out of the Brexit impasse.

This was the view of Ben Broadbent, Deputy Governor of the Bank of England, in a speech delivered at the Business School this week.

Mr Broadbent said that fears of a ‘no-deal Brexit’ were causing companies to hold off their investments until the outcome of Brexit was more certain, even though employment in the UK has grown.

He said: “Business investment fell in every quarter of 2018. Outside recessions that’s the longest period of continual decline on record. And although preliminary estimates suggest it recovered slightly in the first quarter of this year, the standard business surveys suggest the underlying trend is still negative.”

Explaining the investment paralysis, Mr Broadbent pointed to the Bank of England’s own data which shows that 50 percent of firms who took part in a poll rated Brexit uncertainty as one of their top three business risks. He said: “They are concerned about the possibility in particular of a ‘no deal Brexit’ and one without any transition arrangement.”

The speech highlighted how investment demand tends to fall broadly in correlation with a softening of the UK’s job market amid a period of uncertainty. He revealed how Britain’s labour market looks very tight, with the unemployment rate dropping to its lowest level since 1974 in the three months to March 2019.

“Actively choosing the very thing that businesses seem to fear the most is more likely to mean that investment projects that have so far been postponed will instead be cancelled for good." - Ben Broadbent, Deputy Governor of the Bank of England

Commenting on this anomaly, Mr Broadbent said: “What’s particularly striking is that firms have been cutting back on investment while adding jobs. Even as investment was shrinking, employment grew in every quarter of 2018, and quite strongly over the year as a whole.”

He said that in periods of lengthy uncertainty, business investment tends to be less adversely affected than when a resolution to the uncertainty is expected more quickly.

The cost of waiting and forgoing profits “increases with the expected duration of the uncertainty. The longer a firm thinks it’s going to have to wait for things to be resolved, the greater the profits foregone and the more likely it is that the firm will simply decide to get on with things and make the investment anyway,” Mr Broadbent said.

“Conversely, delaying becomes more reasonable if the uncertainty is expected to last only a short time. A firm that has that expectation may as well wait to see how things turn out.”

Mr Broadbent added that investment suffers more if firms repeatedly expect things to be resolved sooner than they actually are. “A repeated series of cliff-edges, each of which is expected to be decisive but in reality, just gives way to the next cliff, is more damaging for investment than if it had been clear at the outset that the process will take time,” Mr Broadbent said. 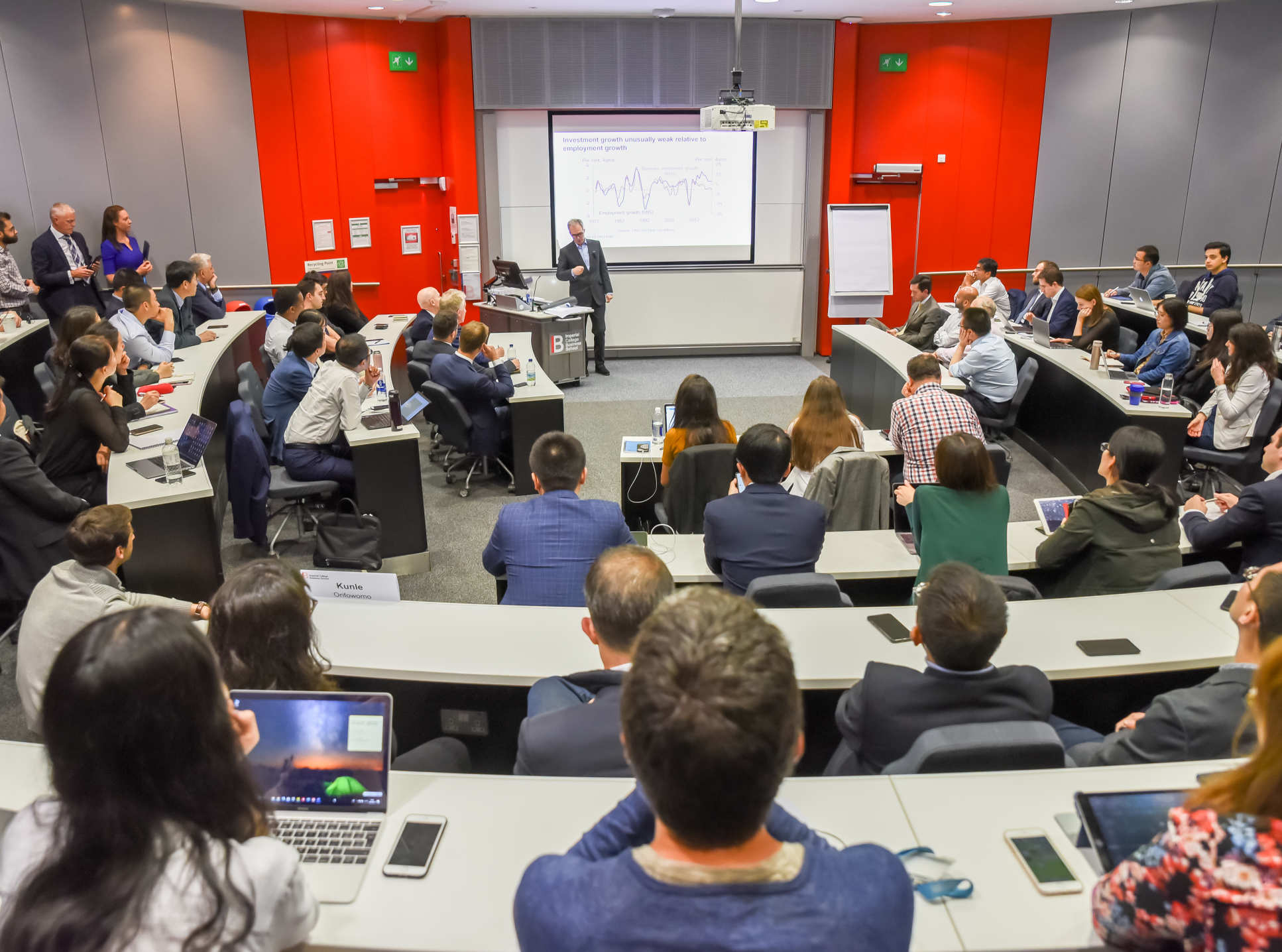 Ben Broadbent addresses an audience at the Business School

He argued that resolving things soon, or in this case leaving the EU without a deal, does not necessarily solve the problem. “Actively choosing the very thing that businesses seem to fear the most is more likely to mean that investment projects that have so far been postponed will instead be cancelled for good,” Mr Broadbent said.

“The point, rather, is that for a given duration of uncertainty, it’s better that people are aware of it from the start, rather than being repeatedly surprised at how long the process takes.”

Professor Veloso said: “We have a wonderful finance department with great faculty researchers doing many things at the cutting edge of monetary policy. We are also fortunate to have the Brevan Howard Centre for Financial Analysis, which among other things is specifically focused on the area of financial stability.”

This release was first published 24 May 2019 by Imperial College London.