Viewpoint: Science expertise is back at the fore, but we must be honest about what we don’t know

With COVID-19 spreading fast, people in power are having a hard time keeping up. Best to send for the experts.

If there’s anything to be taken from the COVID-19 emergency, it might be that the world has re-discovered its faith in expertise, says Anne Glover president of Scotland’s national academy, the Royal Society of Edinburgh, and a former chief scientific adviser at the European Commission. “It’s a great thing that people are turning to science; I would say there was always a very high level of trust in scientists,” she told Science|Business.

“Populism works by manipulating the emotions of a disaffected group of people. But this is not a great time to be blaming people. Instead, you’re seeing individuals stepping up,” she said.

Glover doesn’t quite characterise events as the return of expertise. “By and large, there’s a lot of evidence that flows into policymaking all the time.” But she says, there is at least a return of authoritative figures to the public eye.

The crisis cries out for a cooperative response, and you’re largely seeing that among the four UK nations, Glover said. “In Scotland, we have been seeing a lot of the chief medical officer and Jason Leitch [national clinical director for Scotland’s National Health Service]. Both have clear voices and are honest about where the uncertainty lies – this is comforting.”

“We don’t want to hear our advisers adopting something like a ‘line to take’ from policymakers, I would be very nervous if this was the case. Their value is providing evidence and being as straight as possible,” said Glover who, from 2006 to 2011, was the chief scientific adviser for Scotland.

French president Emmanuel Macron has called coronavirus a war, but “It’s actually completely different to war time. There’s something out there we can’t see and that’s scary,” Glover said.

“But as long as we put science advice first and foremost and allow citizens full access to the thinking behind decisions, we will get through this. You have to tell people what you’re doing but also why you’re doing it,” she said.

Yet despite the best efforts of science advisers, the feeling is that the UK government’s recent handling of the crisis has created an overall confusing picture.

With information and disinformation flowing freely on social media, people are panic buying. “It’s astonishing – I can hardly believe it,” said Glover. This phenomenon points to “a vacuum of credible information – and this includes from scientists, politicians and the media. Without it, we’re seeing citizens take matters into their own hands.”

“There’s a huge amount of fake news on Twitter. Governments should be taking advantage of social media – they do it during elections – and guiding people towards good information sources,” she said.

The UK’s response to coronavirus has come in for widespread criticism recently after health secretary Matt Hancock distanced the government from the so-called “herd immunity” strategy that was discussed by chief scientific adviser Vallance last week. Hancock appeared to contradict Vallance, insisting, “Herd immunity is not our goal or policy”.

Following criticism of the UK government's communications, prime minister Boris Johnson, has begun to hold a daily press briefing. On Monday, Johnson said people in the UK should now stop "nonessential contact" and avoid pubs, clubs and cinemas to slow the spread of the coronavirus. Vallance said school closures could be introduced in the coming weeks (this policy has already been introduced in countries including Ireland and Belgium).

“You need the highest level of discipline to have extremely tight communication coming out. We’ve been lacking that a bit recently. It’s a failure of the translation of advice,” Glover said.

She backs calls by scientists to open up the models on which the government is relying to greater scrutiny.

“All of us would welcome as much transparency as possible,” she said. “Opening up the models and their assumptions is a good step because we have a global community of scientists who work without animosity to get the best possible outcome for citizens,” she said.

What would an EU science adviser do?

COVID-19 has demonstrated that expertise and institutions matter, but Glover is unsure what role an EU chief science adviser would play in the emergency.

In 2012, Glover became the first – and so far only – chief scientific adviser to the European Commission. She stepped down from the role in 2014 after incurring the wrath of green groups with her defence of the science behind genetically modified crops.

Many scientists were deeply unhappy when the previous European Commission president, Jean-Claude Juncker, scrapped the position, replacing it with seven scientists in a Scientific Advice Mechanism. The body has not spoken on COVID-19.

“Had I been there, I would have been trying to work across all our networks. I would also have been communicating with the president as much as possible,” Glover said.

Convening the world’s science advisers over videoconference is another step Glover would have considered. “There is an existing network and I think it’s very powerful. I’m very proud of setting it up,” she said.

But overall, Glover says she’s not sure the role would have been highly valued right now.

“If I was there during this time, I don’t know if there would be huge value in my announcements. Individual member states are dealing with things themselves and are not looking at Brussels; I wouldn’t understand the local conditions in the member states either,” she said.

“So in some ways it could have been seen as grandstanding and not helpful; you don’t want to add to the noise if it doesn’t feel valuable,” she said.

Glover’s background is in molecular and cell biology, with her research exploring at a molecular level the way diseases like Alzheimer's and Parkinson's physically affect our bodies.

She’s optimistic we’ll see a COVID-19 vaccine, but is less certain about when. “You don’t want to forgo trials. You’d need to also think about a strategy for delivering the vaccine – the scale is so massive,” she said.

In the meantime, she says we’ll all have to get creative to stretch out our new, limited lifestyles.

“I do believe we’re irrepressibly imaginative. We’ll have drinks with friends over Skype or via Facetime. My garden is going to get more attention than ever before too,” said Glover. 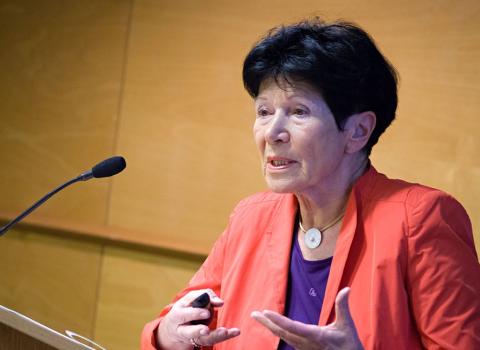