Europe’s big open science cloud project is formally getting underway, with the launch of its Governing Board. In this white paper, a cross-sector group of experts – from academia, industry and public-sector institutions – offers its suggestions on which issues need tackling first. 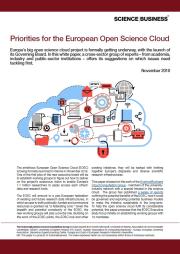 How will Europe’s ‘Science Cloud’ fit into the global research scene?

As EU launches its cloud effort, a Science|Business group says defining relations with the rest of the world is among 10 top issues that need to be resolved

The European Commission is launching its ambitious “science cloud” effort in November to link researchers across the continent – but how will it connect with the rest of the world’s scientists?

That is among 10 policy questions that need to be addressed by the new executive board of the European Open Science Cloud, according to a new report from the Science|Business Cloud Consultation Group, an independent group of cloud experts from academia, industry and public-sector institutions.

The consultation group has just published a list of ten issues that should be high on the agenda of the executive board as it sets a direction for the EOSC, which has a mandate to enable Europe’s 1.7 million researchers to easily share scientific data and software tools. The European Commission is set to soon announce the members of the executive board, ahead of the EOSC’s formal launch in Vienna on November 22nd.

As scientific research is global, the Science|Business group believes integrating the EOSC into the science clouds being developed by third countries is crucial; meaningful scientific progress generally depends on sharing data and insights across international borders. At the same time, the executive board will need to consider how to achieve reciprocity and ensure that all parties accessing EOSC services comply with European data protection laws. The group is also urging the new board to prioritise the development of a sustainable business model and a robust legal and governance structure.

The Science|Business group’s list of ten priorities also includes nuts-and-bolts tasks, such as defining the reference architecture, completing a full definition of EOSC services, and detailing rules of participation for the science cloud.

As it is being structured initially as a high-level expert group with no formal powers, the EOSC executive board will rely heavily on the influence its members can wield to make things happen. Therefore, the Commission is seeking to recruit well-known, authoritative figures who have the clout to corral Europe’s diverse research community to embrace open science and cloud-based services.

Meeting up to eight times a year, the board will be composed of up to 11 members. Up to eight of these will be recruited from the large pan-European research infrastructures, public research organisations, universities, public research funding organisations and industry organisations.  The Commission is looking to balance the representation between research infrastructures, so-called e-infrastructures and end-users. The board will also include up to three independent experts appointed in a personal capacity. The Commission says these experts should be programme managers with international experience, understanding of the institutional framework of research and innovation funding, and technical knowledge of data infrastructures.