Scientists warn the devil is in detail of the European Commission’s latest open access plan, while publishers argue prohibiting researchers from submitting their work to certain journals is a threat to academic freedom

Publishers, scientists and funding bodies alike have voiced concerns to Science|Business at the latest European Commissioned-orchestrated move on open access, saying the time frame is too short and the proposal has not been thought through.

While some laud the ambition, there are worries that proscribing researchers from publishing in journals which continue to charge premium prescriptions could undermine academic freedom.

Others are concerned about national research funding bodies in Europe unilaterally planning to make the research they fund free at the point of publication, fearing a loss of momentum for the open access movement as a whole if American and Chinese funders are not on board.

Not that the plan lacks heft in European terms, uniting a coalition of 11 national research bodies, including big hitting France and the UK, in a bid to make the research they fund free to read by 2020.

Researchers have lauded the boldness of the new policy, called Plan-S, while others have bemoaned it as not being sufficiently well thought out.

The plan, driven by the European Commission’s open science envoy Robert-Jan Smits, targets the inequity of access to science, making the case that the traditional publishing model is a drain on the budgets of university libraries and shuts out people who cannot afford hefty subscriptions. “A better system is possible, and the shift is unstoppable,” Smits said in an interview.

The terms of Plan-S would see funding agencies including UK Research and Innovation, Science Foundation Ireland and the Research Council of Norway requiring grant holders to publish only in journals that offer immediate open access, under a liberal licence giving anyone the right to freely reuse and distribute the material. The plan keeps copyright in the hands of authors and abolishes or phases out publishing embargoes.

The effort will mark Europe out as a visionary place to do open research, said Stephan Kuster, secretary general of ScienceEurope, the body that represents national research funding bodies. Having brokered the plan, ScienceEurope is fully committed. “We didn’t just want this to be another well-meaning declaration,” Kuster said.

Scientists who spoke to Science|Business agreed the initiative has teeth. “This is one of the stronger funder-based policies in open access committed to in recent years, and [the funders] should be applauded for that,” said Jon Tennant, palaeontologist and open science activist.

Whether the plan succeeds or fizzles out hangs on how the funders implement the new policy.

The case for open access is obvious enough: it is not right that funders pay for research to be carried out and then have to buy it back in the form of expensive journal subscriptions. But seiving, editing and peer reviewing submitted papers costs money.  Under Plan-S, as with other open access initiatives, article processing charges (APCs), will be met by funders or universities, rather than authors. The plan also promises to cap APCs, without saying what charge would be too high.

Setting this cap will be “a fraught issue”, said Martin Eve, professor of literature, technology and publishing at Birkbeck, University of London. “Who is to decide on the cap level? Whatever cap is decided upon, it is also likely that publishers will use that maximum figure, so one has to be careful not to incentivise cheaper publishers to raise their rents,” he said.

Research institutions should seize this opportunity to push for open access at the cheapest possible price, said Stephen Eglen, a computational neuroscientist at Cambridge University. “The average cost of publishing a paper today is probably between €2,000-€3,000. We clearly need to get these costs down. I would like to see APCs fall under €1,000.”

Under Plan-S, funders would sanction grant holders who do not comply with the requirement to publish in free to read journals. This resembles the policy of the world’s biggest medical research charities, the Wellcome Trust, which reserves the right to withhold the final tranche of a grant if recipients have not published in open access formats. Wellcome researchers may also be prevented from applying for future grants. “These are the kind of sticks we need unfortunately,” said Eglen.

With Plan-S, Europe is taking a risk in “jumping first”, said Lynn Kamerlin, a structural biologist and principal investigator at Uppsala University in Sweden. “What happens if you lead the charge and no one follows? So many things could go wrong.”

Kamerlin is an open access proponent, who has open access stickers on her laptop and shares all her research results voluntarily. “You cannot argue with the goals of the plan,” she said. “Everything on paper is great, but when you look at it closely, you start to see some holes. What if we’re cutting ourselves out of the best journals, and away from the best research in the world?”

It is also important not to ignore the value that publishers add, Kamerlin said. “People always underestimate how much traditional journals do. They exercise quality control, but they also curate and promote scientists’ work.” Breaking science’s addiction to top-tier journals is no simple thing, she said.

Grant holders subject to Plan-S would be banned from publishing in hundreds of journals, including influential titles such as Nature, Science and The Lancet, unless those journals flip their business model. Publishing in these high impact journals remains the main measure of the quality of individual researchers or their work. It is also a route to wide dissemination of research to the general public, with the top journals running big media relations departments.

Following a transition period, “that should be as short as possible”, Plan-S states scientists would also be barred from publishing in hybrid journals, which charge a subscription but make some articles free to use online.

That ban has provoked protest from publishers, which argue hybrid journals underpin a longer-term  transition to full open access. “We urge research funding agencies to align rather than act in small groups…and for policy makers to also take this global view into account,” said Susie Winter, director of communications at publishing giant Springer Nature.

Elsevier, the world’s biggest science publisher, urged "caution" on Plan-S and said, "Above all, it is vital that researchers have the freedom to publish in the publication outlet of their choice."

Europe has taken the lead in pushing for open access in recent years, but it remains to be seen if its 2020 target is too ambitious.

“We are today at 20 per cent immediate and full open access in Europe,” said Smits. “Fifteen years ago, we were at 15 per cent open access. You can imagine that with this pace we will never reach the target set by the 28 EU science ministers that all publicly funded research be open, free, to readers by 2020,” he said.

But Kamerlin argues a concerted effort is needed. “There’s still no incentive for publishers to change their model unless US or China follow,” she said.

Eglen agreed. Without a united front “publishers will hobble on with the current system,” he said.

Others are concerned about the 2020 timescale. “We’re moving towards open access, but 2020 might be too short a time for us,” said Sven Stafström, director general of the Swedish Research Council. The board of the Council will meet at the end of September to discuss signing up to Plan-S.

“I’m quite certain the group of signatories will grow,” said Kuster. It’s not clear for now whether Germany’s national research council, the DFG, will be among the new recruits. Currently its grant recipients are encouraged to publish open access, but not mandated to.

Even if the system does not completely flip over, open access will continue to gain momentum, Kuster believes. While there is a perception in some parts that open access equals low quality, there are also low quality subscription journals, he noted. And the picture is shifting. “We are seeing the emergence of top quality open access journals anyway,” Kuster said.

Similarly, Eve argues the plan “is likely to transfer prestige to open access venues, which could then cause a worldwide transition or domino effect.”

There are well-respected open access journals, such as Frontiers, with standards on a par with traditional ones. But not everyone agrees that the selection is wide enough.

“We pay far too much for publisher services but I don’t think there are enough high quality open access journals either,” said Stafström. 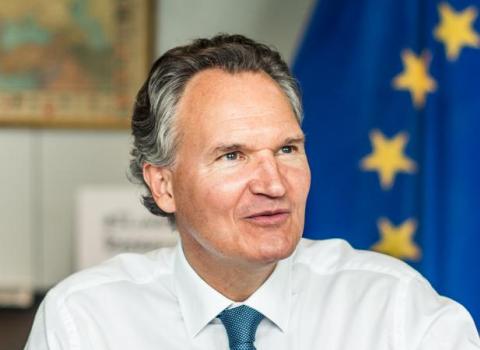 The architect of ‘Plan-S’, Robert-Jan Smits, hopes to force a major change in the business model of academic publishers. The effect will be similar to the abolition of mobile phone roaming charges in Europe, he says