Following objections from member states, the Commission has shifted position and after receiving assurances, now appears open to UK involvement in these strategic fields, while Israel will be allowed to take part in quantum research

By Florin Zubașcu and David Matthews

The European Commission is proposing to allow the UK to join EU-funded quantum and space research projects, while Israel is to be eligible for quantum projects, according to a leaked slide presentation seen by Science|Business.

The slide says the Commission has finished the internal assessment of sensitive Horizon Europe projects it began after a row erupted with member states over its proposal for a blanket ban on the participation of third countries in 21 quantum and space research calls.

A majority of member states want to keep long-standing research partners involved in EU projects. In June, the Commission agreed any exclusions would be settled as part of individual agreements with third countries on their association to Horizon Europe. Eligibility to participate in quantum and space research calls was extended to include candidates for associated country status, as long as they provided assurances they would protect strategic EU assets, interests, autonomy and security.

The slide suggests the UK has provided such assurances on both quantum and space projects, while the ban remains on Israel taking part in space projects, but it will be able to take part in quantum research.

A Commission spokeswoman said talks on whether or not candidate associated countries can be involved in space and quantum research in Horizon Europe is ongoing and a final decision has not yet been taken.

“The Commission is having a dialogue with these countries and the member states on this subject,” the spokeswoman said.

But before the latest proposal on quantum and space has any impact, the Commission has to finalise association talks with both Israel and the UK.

UK association to Horizon Europe, in particular, is still uncertain. Despite having agreed on the broad terms back in December 2020, the Commission has not yet given its final approval.

In a speech to the European Parliament on 27 September, EU commissioner for research, Maryia Gabriel appeared to suggest the delay could be linked to the row between Brussels and London over the Northern Ireland Protocol. A Commission spokesman did not want to comment on Gabriel’s speech.

Member states and research stakeholders, including UK and EU universities, are growing anxious at the delay to the association decision.

In a statement published on Thursday, the European University Association called on the Commission to speed up a decision on association and to put an end to the current limbo. “There is little sign of progress and no clear, official timeline for the finalisation of the association agreement,” EUA said. 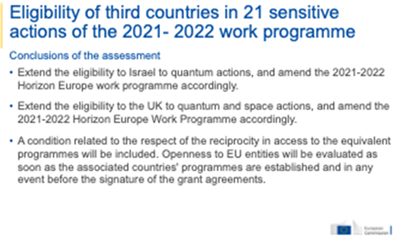 A slide from a presentation by a Commission official