The EU research commissioner pledged hundreds of millions of euros for coronavirus R&D, but called on member states to agree on the Commission’s long-term budget to avoid delaying critical research.

In a written interview with Science|Business, Mariya Gabriel said research and innovation are “critical to tackle this global crisis” and the commission is “mobilising hundreds of millions of euro for research projects.”

However, Gabriel is urging member states to come to an agreement on the EU’s next multiannual budget, which is due come into force on 1 January 2021 along with the next research and innovation programme Horizon Europe, if the EU is to continue funding projects critical for the discovery of new drugs and vaccines and other technologies needed to halt the spread of COVID-19.

The highly contagious viral infection has killed more than 9,000 people around the world. More recently, Europe has become the epicentre of the pandemic, as the number of new cases in China, where the disease started spreading first, has dropped significantly after weeks of lockdown.

The EU has already made available up to €137.5 million in funding for R&D projects working on diagnostics, treatments and vaccines against COVID-19. The commission has announced another €164 million for startups and SMEs with innovative solutions to tackle the outbreak. In her response to Science|Business, Gabriel didn’t mention any new funding lines beyond those already announced, but did suggest that the Commission is going to be more flexible than normal with grantees coping with the virus disruption, and named the first lead grantee – an Italian pharmaceutical company – in the new projects.

Gabriel wanted to reassure researchers that the “indicative” launch of Horizon Europe is maintained, but a delayed budget would hinder EU’s ability to react fast enough to this crisis, Gabriel said. “We have to be clear about the consequences on Horizon Europe of no timely deal on [the budget,” she said.

“I would like to make a strong appeal to the Member States to reach an agreement on MFF in time, while keeping the ambitious budgets for Horizon Europe and Erasmus+,” said Gabriel.

If funded in time, Horizon Europe could help “concrete” results such as better diagnostics tests, new treatments and new vaccines for prevention,” she added.

She also indicated, however, that while the Commission is issuing new grants for coronavirus research, it isn’t yet planning a wholesale re-write of the programme. She said “the scope” of health research was already set out last year with the Parliament and Council, and the draft law “notably provides a framework to address a situation such as the one we are facing today.” She didn’t rule out later changes, however – for instance, creation of a special part of the programme, called a “mission”, on the disease. “There may be further areas identified at a later stage, but it is too early to prejudge this now.”

According to the commissioner, there is no better example about the critical role of research and innovation in addressing societal challenges than the current coronavirus pandemic. “Research, education, innovation combined with benefits for the citizens will play a key role for our success as a society in the months to come,” Gabriel said.

“We, as a society, have to adapt to the changing situation, today more than ever. To be able to react fast, to have the necessarily flexibility – ultimately, we are talking about saving people’s lives – we need Horizon Europe to start with a timely launch on 1 January 2021,” Gabriel added.

EU-funded researchers are already asking for deadline extensions for their projects because many activities were slowed down by the recent bans on meetings and international travel.

The commissioner admits the crisis could make interaction between members of research consortia will be difficult and said it is open to extend deadlines.

"We are fully aware that restrictions related to the outbreak may hinder applicants’ ability to prepare and finalise high-quality proposals.,” Gabriel said. “The decisions will be taken case by case,” she added.

In her written answers to questions from Science|Business, Gabriel also indicated that the Commission is moving faster than normal to get coronavirus research money flowing. Usually it takes about a half-year for the Commission to get all the paperwork done for awarding a grant. But Gabriel said that, for the first coronavirus research call announced 30 January, “the proposals were evaluated within two weeks. With the help of 43 experts, we were able to evaluate the proposals remotely and through consensus meetings in Brussels.”

Though it has informed the first 17 winners, the Commission hasn’t yet announced their names – but Gabriel said one of them is a group led by an Italian company, Dompe farmaceutici SpA. Dompe is an 80-year-old Italian pharmaceutical company, with revenues last year of €450 million, and medicines for a range of diseases from diabetes to cancer – but has research underway on cells’ protein receptors, a mechanism used by the coronavirus to latch onto a cell.

Gabriel outlined other administrative steps to ease operational problems for Horizon 2020 – whether working on coronavirus or not. The said people on a Horizon grant who had project-related travel plans cancelled could still count the expense as “eligible costs” under the grant. And she said the virus crisis could be regarded as a “force majeur” under the grant contract terms, so depending on the case “funding bodies will exercise their discretion in permitting substitute performance or delayed performance.”

Further, according to other Commission sources, researchers applying for coronavirus projects, can opt for retroactive start dates, with the earliest date being the date of the submission deadline. The workaround means the EU grant would cover eligible costs made after the deadline of submission, not just costs incurred after the grant agreement was signed. 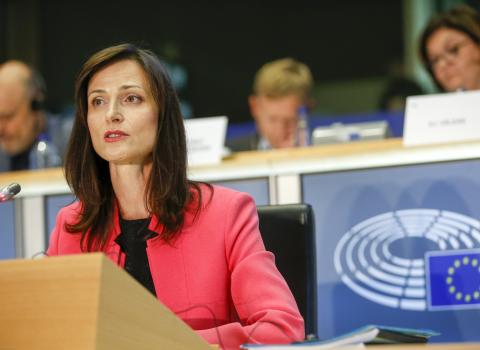 Gabriel: ‘Research and innovation is critical to tackle this global crisis’

In exclusive written Q&A with Science|Business, EU commissioner for research, innovation, education and youth vows hundreds of millions for coronavirus R&D but calls on member states to agree on the multiannual budget to avoid delaying critical research.