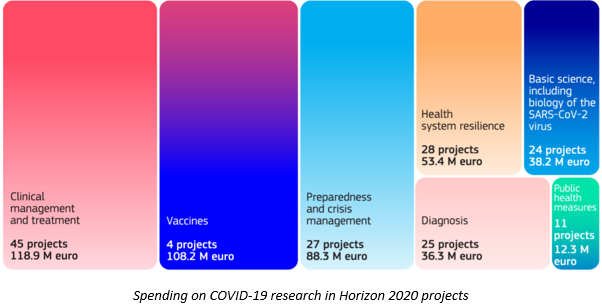 The European Commission has invested €469 million in 105 COVID-19 research projects, with funding for 45 clinical trials taking the biggest share, of €118.9 million, according to the latest data.

Four vaccines projects received €108.2 million, while basic research projects analysing the biology of the SARS-CoV-2 virus were awarded €38.2 million. A further 27 projects worth €88.3 million looked into crisis management and preparedness, and 28 projects worth €53.4 million aimed to increase health system resilience.

The 105 projects were funded through Horizon 2020 funding calls, the first of which was launched on 30 January 2020, the day the World Health Organisation declared COVID-19 a public health emergency. These are the biggest projects; in total the European Commission is putting €1 billion from Horizon 2020 into pandemic-related research, of which €780.8 million has been mobilised.

Of the total, €400 million is being distributed through InnovFin, of which €178.5 million has been allocated to vaccine development, including financing for the Pfizer/BioNTech vaccine, which was the first to be approved for use in the EU.

The Commission also awarded €100 million to the Coalition for Epidemic Preparedness Innovations, which has put money into a portfolio of COVID-19 vaccines. Another €25.3 million went to the European and Developing Countries Clinical Trials Partnership.